After a summer hiatus, our writing group gathered via Zoom yesterday to share what we’ve written to the prompt “a black and white photograph.” Here’s my piece. 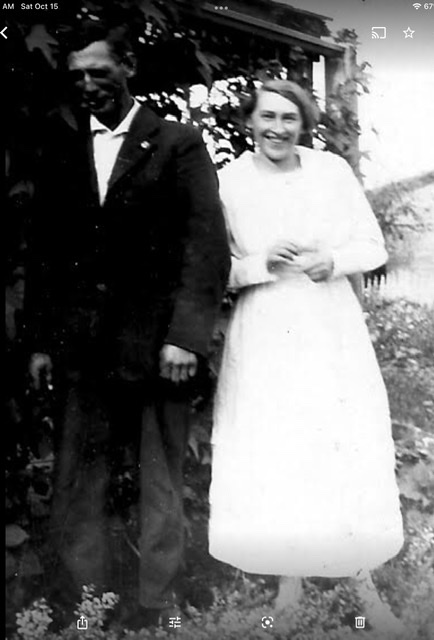 The 3 x 4-inch photograph is blurry, and the lighting isn’t good. In it, a couple stands in front of a porch covered with vines or garland in a bed of what looks like flowers. Behind them, off to the side and in the background, there’s a picket fence and, farther back, the shape of a house.

The man’s name is Tenor. He’s dressed in a dark suit with a light spot on the lapel that could be a small boutonniere. He’s standing in shadow and at a slight angle—almost prophetically—like he’s about to walk out of the frame. His facial features aren’t clear, but there’s something about the way the shadows fall on his face that makes me think he’s smiling. The woman, Belle, is wearing an ankle-length long-sleeved light coloured dress that may or may not be white. What strikes me most about the photograph is her smile. She’s beaming, looking a little mischievous and, though I can’t see her eyes, I’m certain their sparkle matches the brilliance of her smile. Her short dark hair is parted on one side, falling to her earlobes. There’s nothing “done up” about it and it’s not what I’d call attractive. She seems to hold something in hands clutched together at her waist. A handkerchief? A flower? Or maybe she’s just fiddling with her hands because she’s giddy and nervous. If only the man in the shadows had noticed, reached out, and held her hand in his own.

The year is 1923. He is 25-years-old and she is 26. In the next eight years, beginning with the occasion marked by this out-of-focus photograph, they will welcome three children into their family. When the youngest, a daughter, is three months old, during the devastating years that came to be known as the Dirty Thirties in Saskatchewan—years of dust storms, grasshoppers, drought, and hail that destroyed millions of acres of crops, not to mention breaking the spirit of countless families who were left destitute—the man will die of pneumonia. Subsequent years will take the sparkle from Belle’s eyes and, by the time I know her as my grandma, the clear-eyed young woman with the fetching smile captured in this photograph will, herself, be a shadow of who she once was, having borne weight so heavy that her back developed a permanent stoop.

This photograph is a stark contrast to the professional wedding photos we’ve grown accustomed in the twenty-first century. Most modern wedding photos are in colour, of course, tack-sharp and picture perfect. Couples purchase packages with hundreds of images taken on their special day—photos leading up to the actual wedding, the procession, the ceremony itself,and tons of poses with an assortment of friends and family taken afterward. Sometimes, after the ceremony and before the reception, the wedding party steals away with the photographer for distinctive photos taken in places with special meaning to them like golf courses, waterfronts, or parks. Later, images are enlarged and hung on the wall or put on a shelf in the couple’s home, and given to family and friends as mementos. A photo like this one, with the man in the shadows and the woman’s eyes not clearly visible, would never make it out of the virtual darkroom.

I came across this small photograph many years after my grandma and her children—my mom, aunt, and uncle—had passed away, decades past the date when the grandfather I never knew died. I don’t know who took it and there’s no one I can ask about it. Truth be told, I’m not even certain it was taken on the day they married. But there’s something about this simple out-of-focus black and white photograph that strikes me as extraordinary.

There is, of course, my grandma’s smile and the realization that she wasn’t always the stoic curmudgeonly woman I came to know. Would the happy moment captured by this black and white photograph ever have happened if my grandma had an inkling of an idea of what lie ahead for her? Would she have chosen another man to marry if she knew she would be a wife, not a widow, for such a short time? Would my mom ever have been born? And as for the looming Great Depression—well, such a thing was unimaginable during the prosperous post-war Roaring Twenties.

The photo whispers to me from 100 years in the past, reminding me to do my best to remain fully present today, and not fret about tomorrow. We, too, are living in a time unimaginable a few years ago. I couldn’t have foreseen what happened in 2020 or what’s stillunfolding in the aftermath. Conversely, neither could I have imagined my daughter and granddaughter living in Caronport, Saskatchewan or Gerry’s and my pending move to Moose Jaw.

Some of my favourite words written by author and theologian Frederick Buechner are these: “Here is the world. Beautiful and terrible things will happen. Don’t be afraid.” He’s talking about the grace of God but his words are also relevant to the day on which someone snapped a photograph of a man standing in the shadows and a woman whose face was lit up with
a fetching smile. They’re applicable to those of us who started out in 2020 with plans that would be dashed, and they’re pertinent to every person who has lived and who is yet to be born.

Beautiful and terrible things will happen. Live in, and fully embrace this moment. Don’t be afraid.

We’re a “Go” For Launch (and Friday’s Fave Five)