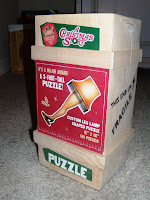 I can only recall one Christmas when there was really something that I wanted to receive. More than anything that year I wanted a Spirograph – do you remember those? They were kits filled with colored pens, plastic circles and bars with holes in them that had cogs that fit together so that you could move them and draw the most beautiful designs.

I needed one of those Spirographs! In the weeks leading up to Christmas, I had gathered various paraphanalia from around the house in an attempt to make my own homeade version. I had mason jar lids, those plastic rubber sealers, all the colored pens I could find, and I managed to make some pretty funky designs.

On Christmas morning, there was one gift that was the last one given to me. I just knew it had to be my Spirograph, but when I opened it up I found a Hands Down game instead. I’m not sure who was more disappointed (okay, I am sure, it was me!) my Mom or I. What had happened was that she had ordered my Spirograph from the Sears catalog. I guess that Spirograph’s were big sellers that year, because they ran out and shipped a substitution

Mom asked me if I wanted to keep the game, or if I wanted her to send it back and try and get the Spirograph. Hiding my disappointment, I assured her that the game would be just fine.

We played with the game off on on on Christmas Day, and I genuinely tried to muster up some enthusiasm for it. Later in the afternoon, I went to my Mom and confessed my disappointment and told her that if it was really no trouble I would prefer it if the game could be returned and we could try to get the coveted Spirograph
Well, eventually I did get my Spirograph and I loved that thing. In fact, when my kids were old enough, they also loved playing with it when we went to visit Grandma. Over the years, some pieces were lost but it was still possible to make beautiful pictures

I only just got rid of what was left of the Spirograph a couple of years ago when we moved. I wonder if part of the value was attached to my anticipation and waiting to receive it. I choose to believe that it was. Often, those things that don’t come immediately or easy are the things we value the most

P.S. Stay tuned for the winner of the B&N or Border’s gift card!