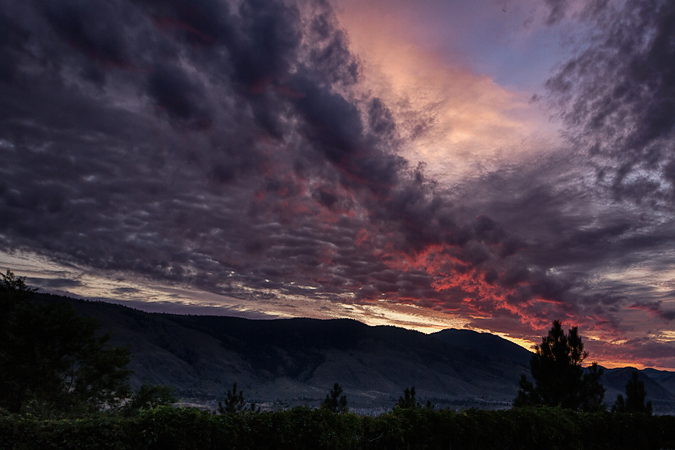 I’m drawn out to the deck by splendour in the morning sky. I lean against the railing, hands cupped around a warm cup of coffee, and worship as I look to the east. My whispered prayers mingle with the sounds of day beginning in the valley below.

In the distance, from the valley, comes the sound of cars: people in a hurry to get somewhere important. It’s not yet dawn and the birds haven’t yet begun their song, which would take my attention from the low drone of busy. I listen, then let it go.

I look to the east at the city that is just waking up and think about the school children and educators who have been displaced because of a fire that consumed a school last night. One of those terrible things. I scan the ridge, and look for movement revealing a deer, a coyote, or a bear but the ridge and its inhabitants still rest.

My eyes return to the east and the changing blues and pinks—the image that was there a moment before is no longer. To attempt to capture the glory with a photograph seems pointless. Abiding, being in and with the changing sky seems so much wiser. So often we are prone to accept a reasonable facsimile rather than doing the work of abiding.

How easy it would be to pull out my phone or my camera and take a photograph and then move on with my day. But the better, lasting, life-altering work is to stand in the morning chill and watch until my imagination takes flight and I have no choice but to whisper prayer.

I pray psalms and prayers that pilgrims have prayed through the ages, and I speak aloud the secret things that weigh on my heart. And when the pinks fade and the awe gives way to peace. I turn and go back into the house, filled and emptied at the same time.