Canning coleslaw? Yes, I was skeptical too but I read account after account about how delicious this was and so I decided to try a small batch. It was so good that a small batch led to another small batch which led to a larger batch and now there are fifteen quarts and two pints on my canning shelf, to say nothing of what we’ve already consumed.

It’s true. This is good stuff and it remains crispy even after processing. One could dress it up a bit by adding sunflower seeds or raisins after opening a jar. I even read accounts of folks adding mayo. We like it just as it is out of the jar; I’ve served it as a side dish and put it on hot dogs.

I got this recipe from a blog called Chickens in the Road but I subsequently found it on many other sites as well. The recipe says that this coleslaw can also be frozen instead of canned.

Yield: It’s difficult to predict how much you’ll get from a batch given the varying sizes of cabbage heads and other veggies. Given that, I found that the volume of syrup the recipe makes was far less that what I needed and so I increased it accordingly.

Shred vegetables and combine in a large bowl. I used my food processor for everything.

Add salt and let stand one hour. Drain water from vegetables. (The purpose of this step from what I can tell is to draw moisture out of the veggies so they remain crispy. I also saw varying measurements for the salt–some said a teaspoon and others said a tablespoon. I used a teaspoon, got very little moisture out from the veggies, and my coleslaw was absolutely crunchy. I will probably skip this step in the future.)

Boil syrup ingredients together for one minute. Cool. (I think it would be important to cool the syrup if you were going to freeze the coleslaw. As I was canning it, I didn’t cool it completely because I wanted to do a hot pack.)

Add syrup to vegetables and pack into jars. Wipe rims to ensure they are clean and apply lids and rings. Process in water bath canner for 15 minutes

For my altitude here in Kamloops I need to increase the processing time by 5 minutes. You need to check the altitude for your location and adjust accordingly. 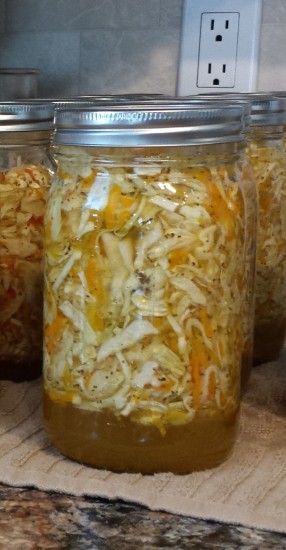