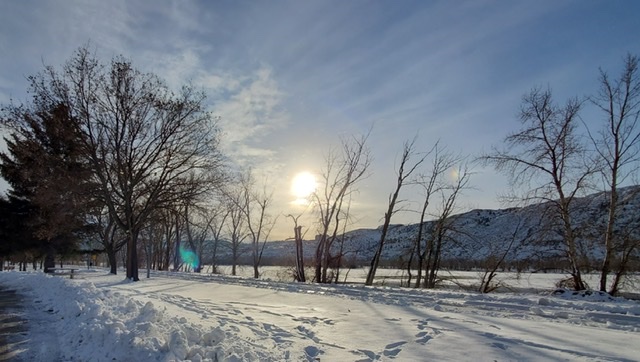 It has been a very mild winter so far here in the interior of British Columbia. Occasional bouts of snow that melts almost as quickly as it arrives, mild temperatures, and a good measure of sunshine. No complaints here.

But this week we’re experiencing a polar vortex and for those, like me, who have become accustomed to not having to don our heavy winter coats and pull on gloves, it’s cold.

Yesterday, I had an early appointment I had to go out for and I posted something on my social media about not looking forward to heading out on a morning where the “feels like” temperature was -20C (that’s-4F).

I was quickly called out by my Saskatchewan family where it’s really cold right now. I think the most extreme was someone who said it was -39C / -53C with the wind chill (that’s -38F / -63F with the wind chill) when he went out to start the car in the morning. That’s cold. Really cold.

Having grown up in Saskatchewan I know what cold feels like, British Columbia cold doesn’t compare to Saskatchewan cold, but it’s been many years since I stood on the frigid prairie in the middle of winter and I’ve grown accustomed to a gentler climate.

Friends who live in Texas understood my lament about the cold. To them, my claim about it being really cold at -20C / -4F was legit. It’s all relative, isn’t it?

And isn’t it also an illustration of the way our perception influences our reality? And how there’s always someone experiencing something harsher or easier than our current state? Doesn’t take away from our own experience, but something to consider.

This morning, my weather app says it feels like -25 out there. It feels like -44 in Moose Jaw, Saskatchewan where I grew up, and -28 in Prince George, British Columbia where my kiddos live.

It’s cold, but there are 39 days until the first day of spring.