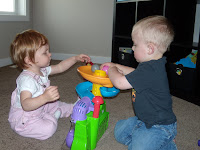 It is hard to believe it’s been one week since I updated my blog.  I am heading back home today after an unexpected trip to Canada to help my daughter as she has battled a health issue.  I’m greateful to have been able to come and help her with caring for my granddaughter and everything else that young moms have to take care of.  Thankfully Laurinda is on the mend, though the doctor says it will be an up-and-down recovery.

It has been a blessing for me to spend time with both of my grandchildren this week though.  They grow and change so quickly, and Gerry and I have made it a priority to visit as often as possible during these early years.

Only one experience somewhat marred what has been a blessed week.  One afternoon I had taken my granddaughter to visit our son, his wife, and our precious grandson at their home to give Laurinda an opportunity to rest.  I was on my way back to Laurinda’s house and stopped to get an Iced Capp at Tim Hortons for her and, as Makiya was in the back seat, I decided to go through the drive-thru.

I followed the arrows; I thought I knew where I was going; but it turned out that when I reached the end of the parking lot where I intended to turn into the drive through there were three cars blocking the way and they were also going to the drive-thru.  When the car immediately in front of me pulled forward, and the one behind stayed back to leave a gap, I could have driven through, driven down the road, turned around and joined the back of the queue.  I didn’t.  I assumed that the driver was waiting was giving me an opportunity to join the queue, so I waved in a gesture of thanks, and turned into the line-up.

I assumed incorrectly and the woman driving the car that I turned in front of was not happy.

She rolled down her window and began spewing obscenities at me and calling me names.  When it was my turn to place my order at the speaker she blared her horn.  She made gestures toward me that left no doubt about her state of mind.

I felt bad that I had misjudged her intention but it wasn’t like she was going to have to stay in line that much longer because of it.  There was also only one car behind her when I turned in front of her so it wasn’t like I was affecting numerous other people either.

When I got to the window to pick up and pay for the Iced Capp I had ordered for Laurinda, I told the girl that I also wanted to pay for the car behind me; it turned out that she had also ordered just an Iced Capp.

For the sake of thirty seconds and a couple of dollars she lost her temper and spewed anger.  I wondered what her day had been like up to that point and what she had ahead of her for the rest of her day.  My hope was that my gesture of paying for her order would diffuse some of her anger so she wouldn’t carry it with her and direct it toward anyone else.  My fear was that she would feel justified and entitled.

I glanced in the rear view mirror and smiled at my granddaughter who was humming a little tune, said a quick prayer for the angry woman, and continued on with my day.