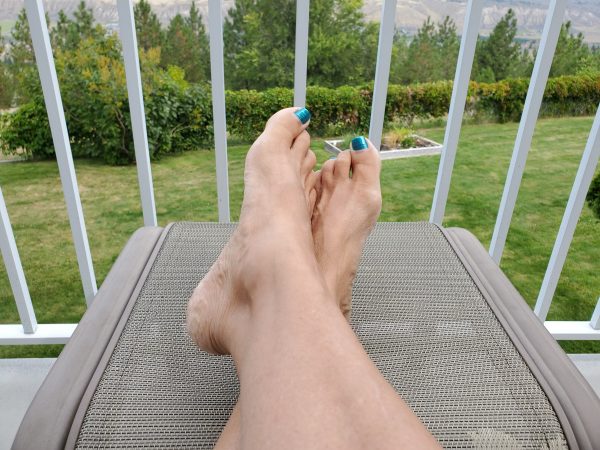 I think I broke my foot last night. Well, maybe I didn’t break it but I sure did something to it when I walked head-on into the corner of my dresser in the dark while I was holding my dog, causing me to stumble my way to the bed and fall on it doubled over in pain. It wasn’t my finest, most graceful, hour.

Gerry’s away on his annual salmon fishing trip and I’ve been hunkered down in the bowels of my book manuscript. That, and taking a good portion of time to sit on the deck with one or more of the many books I surrounded myself with this summer. It’s been great.

Maya has been less enchanted with the time. She gets antsy when the alpha in our little pack is away and has tested me every time I take her outside. She’s also not a huge fan of the heat and, while I’ve been content to bask in it with books and ice water, she’s been restless.

I think it all caught up to her last evening because she threw up her dinner. No big deal. Dogs do that sometimes. Then she threw up the previous night’s dinner, and dinner from last Tuesday too. I was awakened a couple of times during the night by her retching next to me and, groggy, I swooped her from the bed and took her to the bathroom where cleanup on the floor is much easier than cleanup on a duvet though by then there was nothing left in her tiny tummy. It was on the return trip from one of those junkets when I walked smack-dab into the corner of my dresser.

So, that. And a trip outside for her to sniff the grass at an hour when I’m normally up and reading and writing but, dang, I was just too tired to make it happen this morning. When I did stumble to the kitchen to switch on the coffeemaker (quietly, so as not to wake my sleeping pup) it was far later than is normal for me. I decided just to go with it. I took my coffee back to bed and ended up spending hours working on the manuscript. It was good work but I’m getting a later start to the day than I have in years–decades maybe.

Now I’m up, it’s almost lunchtime, I’m tired and hobbling around like an old woman while Maya is snoozing. Did I mention that the injured foot is the same one I twisted when we were rock picking with the girls last weekend? Poor foot. She’s taking a beating this summer. I enjoyed a pedicure earlier this week so at least she’s pretty in her pain.

So, I suppose I’ll take a slow day today. There’s wisdom in that. More than I like to admit sometimes.