It seems like almost every day there is some story, some photograph, or some other supposed truth circulating on social media that seems hard to believe. Yet many of these things go viral and intelligent people end up believing the stories to be true.  A by-product of the twenty-first century and the lightening-fast speed with which we can share information, right?

I have a couple of silly photographs that I remember my dad showing me when I was a kid–the one shown below being one of them. I honestly don’t remember if Dad tried to string me along to get me to believe that there really were grasshoppers measuring three feet in length at one time, but I doubt it. The photograph was just something funny and worth a laugh now and then. 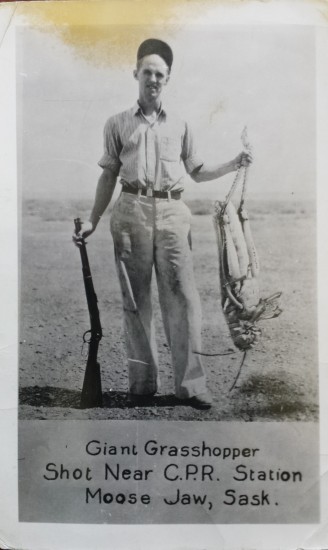 When I came across this photograph in a box of old pictures recently I decided to do a quick Google search to see what I could find about it. Turns out that the photograph had a pretty wide circulation back in the 1930s and its location was attributed to Montana, North Dakota, Wisconsin, New Zealand, and an assortment of other locations in addition to Saskatchewan.

Those were harsh, dusty, and horrible years for many families living on the US and Canadian prairie and grasshoppers did, in fact, destroy crops and lives during the Great Depression. It’s no wonder that some enterprising individuals found a way to laugh in the face of adversity and postcards like this one became popular.

I can’t imagine that any of the 1930s farmers actually believed this photograph to be real. They had only to walk outside where the hoppers were everywhere, chewing and destroying their hopes and dreams, to know that it didn’t take a grasshopper as big as this one to destroy a life. The reality was right there in front of them.

Many of those families packed up their meagre belongings and left the dusty prairie in hope of finding a better life elsewhere. They may have seen postcards like this in a mercantile store or a gas station and smiled at the whimsy of the photographer, thankful for a brief respite from the burden they shouldered as they left their dreams behind following an uncertain and dusty road.

Other families chose to ride out the dust storms and crop failures–perhaps they were more optimistic or maybe they lacked the resources, physical and emotional, to leave. I imagine barefooted children in an almost-empty convenience store giggling at the image of a grasshopper larger than they were. They knew the reality–the incessant click-clicking of the grasshoppers as they flew and the defeated look in the eyes of their parents as crops were destroyed.

As I’ve been reading historical accounts of life on the prairie during those harsh years I’m struck again and again with how those who lived through those days remember the good times and laughter. They remember the camaraderie they enjoyed with one another and the way they shared what little they had with their neighbours. They remember simple joys like foul suppers, pitching horseshoes, and school concerts.

I’m reminded anew that we don’t need the latest and greatest things to have a happy and fulfilled life. We don’t need the biggest houses, the fanciest cars, the fattest bank accounts. We can learn from these folks from yesteryear who look back on the harsh times when many families had nothing, or lost everything, and yet still found ways to be thankful for what little they had. They still found ways of having fun and making memories.

What my quick internet search about this photograph revealed that was most surprising–and frankly disturbing–were relatively current stories speculating on whether or not this was fact or fiction. Kind of makes you a bit concerned about the future of our society, doesn’t it?

Remember: If it seems too far-fetched to be true it probably isn’t and Snopes.com is a great resource to check out many of these urban legends before you share them.