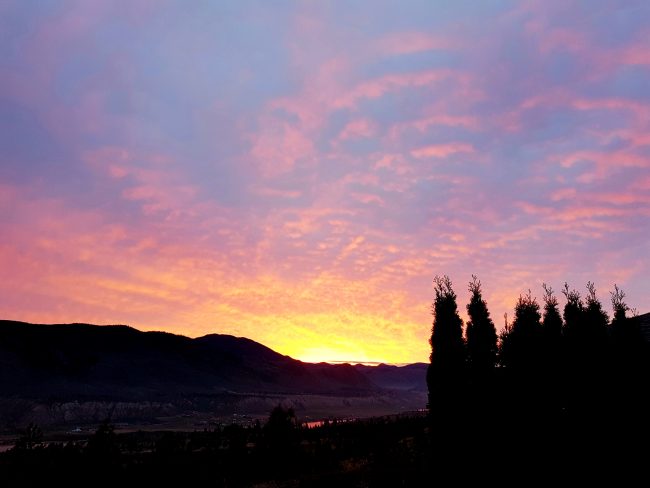 I miss the awe of watching the changing eastern sky in the early morning when morning whispers and night tiptoes into obscurity.

For many months now, when I wake shortly after 4 a.m., I’ve chosen to spend the first silent hours under a Sherpa blanket in the den, with a basket of supplies (Bible, notebook, pens, sticky notes) beside me and a cup of soy milky frothy coffee on the table next to me.

I do the same thing here that I used to do there. Read scripture. Scribble thoughts. Contemplate. The important work of keeping the wild things away while I fuel up for the day.

This morning I thought about that eastern sky and the wonder of dawn breaking and a holy presence that’s just as likely to show up in this room where, in a couple of hours, a little Yorkie will make herself known and I’ll open one of the French doors, welcome her into the sanctuary, and she’ll jump up on one of the sofas and curl up for a couple more hours of sleep.

And there’s the scrape of our neighbour’s snow shovel again and, sure as anything, there’s something holy in that sound. Practicing the Presence. That’s how a 17th century monk described abiding with the Divine in the quotidian.