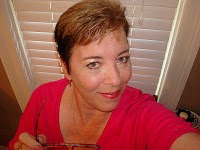 We have company in the Velvet Room today! Angie Ledbetter, also known as Gumbo Writer has stopped by! If you have not yet had an opportunity to visit her blog, I encourage you to stop by. You’ll find that she’s got a heart the size of Louisiana and a sense of humor to match. She’s always got a recipe, a good story, or something writer-related to share. Settle in now, let’s hear what she has for us today.

I’ve come across a lot of wacky editors in the ten years I’ve been in the freelancing biz, especially in magazine and newspaper industries. Prose and poetry publications aren’t totally immune either, but they seem to have a more stable staff on the whole.

As a newbie, I thought it was inexperience preventing me from understanding the parameters, instructions and requests dictated by editorial folks. But as I started moving in writing circles, I heard similar horror stories from other writers and poets. While it made me feel marginally better to know it wasn’t just me who dealt with less than professional people, it also meant the path to writing success was going to be fraught with roadblocks and potholes I hadn’t considered when seeking my journalism degree.

Here’s what (who) I’m talking about:

The Switch-and-Baiter – This editor never can get her publishing deadlines or editorial vision straight in her own mind, much less communicate to writers what she really wants for her magazine. An edict to write a 2,500 word article on the life of the fruit fly turns into a demand for a 700 word book review on The Lord of the Flies. She thinks nothing about asking for multiple rewrites or switching topics at the last minute. Any and all requests of writers, to her mind, are covered under the measly payments they will receive sometime in the distant future.

The Commando – Meet the man who annually appears on the Worst Bosses list. He held a mishmash of odd jobs over the last 20 years before taking over Uncle Elias’s weekly newspaper. He makes ridiculous demands of writers because he doesn’t know his butt from a hole in the ground. This little Napoleon thinks MLA style means Martinis at Lunch Always. He also has no idea he is publishing a rag that is journalistically/literarily bankrupt, and thinks nothing of making frequent outlandish requests of staff and freelancers. This unqualified oaf often butchers perfectly lovely prose or sound articles because he is in love with himself and wants to impose his “vision” on every piece of work that comes across his desk. He is dating the Switch-and-Baiter.

The New at the Helm – Akin to the Commando, this editor just took over editorial duties at a struggling publication last week. She has inherited unfinished projects, half-written articles or prose, communiqués with writers begging for promised clips or payment for work long ago published, an indecipherable editorial calendar, a deadline for the next issue which has already passed, and a large bottle of aspirin. By the end of her first day on the job, she realizes the terrible mistake she has made signing on with this outfit. There’s no way she can fix the mess the many previous editors have left. She will quit as soon as she lands a position with a reputable employer. Writers past, present and future will be left to figure out what’s what and who’s who and if they will be paid.

The God Complex Commando – This supreme being thinks he is doing writers a favor allowing them to write for his publication or website. For the wonderful benefit of a portfolio clip and below minimum wage salary, writers are forever beholden to him for allowing their work to see the light of day. Any and all demands made by this little Napoleon are to be met with absolute compliance and joy…no matter how ridiculous, callous or just plain inconsiderate.

The Sweat Shop Employer – This unethical editor wants all writing done for free. If you refuse to provide it, he’ll get it somewhere else. He’s a fan of journalism job bidding websites and knows he can get free labor if he searches hard enough for new but desperate talent. If he runs dry of material, he will often steal it off the Internet or elsewhere, remove the author’s name, and publish it on the sly for free.

The Purely Insane (TPI) – There are more and more of these editors out there all the time. Maybe they got that way from working with those described above. Or maybe they were born that way. They come in a large variety: hazy addicts who picture themselves as heirs apparent to the literary throne, creative geniuses who can’t be bothered with mundane things like giving writers reasonable and understandable guidelines, and those afflicted with a host of untreated mental disturbances. Like the stock market and real estate fields, TPI are attracted to the writing world because of its constantly changing and exciting nature.

Thankfully, there are still some talented, considerate, aboveboard editors whom writers are lucky to work for and with. They are jewels in the literary crown, but like most good things in life, must be searched out. As they often go unrecognized and under appreciated, I’d like to say Thank You to the Rose & Thorn founder and staff for being some of those gems.

Angie Ledbetter is Co-Publishing Editor of the Rose & Thorn Journal and Co-Author of Seeds of Faith: An Inspirational Almanac.  She is a writer, editor and poet and is currently working on a novel.