I’m pleased to welcome memoirist and singer Sonia Korn today. At the age of eight, Sonia was declared an enemy of the German State. She and her family were given a grim option: find a way to disappear, or be rounded up and sent to certain death. Sonia’s Song is the story of a little girl who rose from war’s ashes to sing songs of hope and love world-wide.

In honor of Sonia’s visit we’re giving away a downloadable gift bag consisting of an ebook copy of Sonia’s Song and an iTunes download of Sonia’s CD “Chansons de ma Vie: Songs of Love from Around the World”. Simply leave a comment to be entered in the drawing. I’ll randomly select the winner on Friday.

I grew up in pre-war Germany, and escaped to Belgium just before Belgium fell in May 1940. My family and I were hunted and we changed address, identities, habits, until I was placed in an orphanage under an assumed identity in 1942. For many years after the war, I remained silent, feeling my story unworthy of attention, merely because I was alive to tell it. And, in truth, a sense of survivor’s guilt contributed to my silence. However, as I grew older, I realized that I am a survivor of a different sort, with a different story to tell. My story, too, has value and needs to be told.

When I wrote the first edition, I was the same age my mother was when she died. I wanted to record her story and my story for my children, and for my three beautiful grandchildren, so that they will know my and remember my story.

But I also had a need to write that was even more pressing. I had floods of memories from my childhood that were bottled up inside me, memories that even after 70 years later kept me up at night, haunting my dreams and feeding my nightmares. I felt that if I could write my memories down, I would no longer be troubled by the worst of them, though I knew that it would be a very painful process.

As authors we are often told that we should write about what we know. But when you are writing a work that centers on your childhood, how does one sort through the memories to create a cohesive narrative, one other people would want to read? I had a very personal story, but I also felt that it could show people a unique insight into this dark period of history. For a book that centers around a war, there are as many moments of kindness, and forgiveness and bravery as there is brutality and cruelty.

I found photo albums, filled with old photos that my mother collected and saved—I don’t know how she kept all those photos, with the sheer number of times we were relocated. Some were from her family, and some from my father’s, all of whom except for two were lost.

I found a picture of my brother on his first day of primary school, looking apprehensive, holding a Zuckertute, a cherished symbol among German children starting school. I found a picture taken less than a year later of him and his friend standing in front of the school doors, now closed to him and me because we were Jewish.

So many photos, and with each one a flood of memories fill my mind. I forced myself in a room, and wrote. I wrote fragments of memories, conversations, anything that I could remember. I tried to be as careful as I could, to write down everything as clearly as my recollections allowed. I think the most important thing for a writer to remember is to be patient with yourself; be gentle, and have faith—in yourself and in the process. Give it time. Our minds are incredible wonders, we are each capable of storing huge amounts of information. Even your conscious mind can’t keep track of the details that are stored in your brain, just waiting to come back up to the surface, and the mind is capable of trillions of thoughts at any one instant.

For me, I found the process of writing my memoir being very much like creating a sculpture that you can build up and carve down and build up again. There is a time for writing, a time for paring it down, and in a way it’s good to keep those two parts separate so you don’t get over critical and stop yourself before you begin. The process will be a painful one, but hopefully—as it was in my case—cathartic, and what you write and polish will be inspiring to the people who read it. 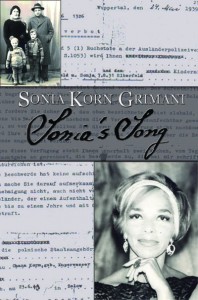 Sonia Korn-Grimani earned her doctorate in French literature and the teaching of foreign languages, and directed a multi-cultural language program at UNESCO. With her husband John, and their children Anthony and Renee, Sonia traveled and lived all over the world. She taught foreign languages at the university level, and performed frequently to the delight of audiences worldwide. In her album Cantos al Amor, Sonia sings in 16 languages.

Sonia continues to sing regularly at UNESCO events inFrance, and is also frequently invited to share her Holocaust experiences as a guest speaker in high schools, universities, synagogues and churches.