Today, I’m delighted to welcome memoirist and adoptee Laura Dennis. As you know I feel strongly about giving voice to adoptees–those whose voices have been silenced for too long. Laura’s story goes beyond adoption issues into, what she describes as a”descent into madness“. Laura is graciously giving a way a copy of her book and all you have to do to be entered into the drawing is to leave a comment on this post. I’ll draw the winning name on Saturday.

Each generation has that “Where were you?” moment: the Moon landing, the Kennedy assassination, or the Challenger explosion are good examples. Because Linda and I share a special connection in that we’re both adopted, I’d like to tie together themes from my adoption with today’s anniversary, and share my own “Where were you on 9/11?” moment.

My adoptive mother had always supported my need to know my biological history. Late in elementary school, when I starting crying periodically late at night, aching to meet my birth mother, she consoled me, but what else could she really do? My adoption had been a closed one; the prevailing attitude in 1970s New Jersey that sealing off the records and ending any contact with the biological family was best for everyone.

When I was finally ready to search, my mom helped me get in touch with the adoption agency and retrieve my files.

When it was time for me to reunite with my birth mom in person, my adoptive mom was truly happy for me.

But when my two moms met each other in April 2001, I saw the panic in my adoptive mom’s eyes as she processed the readily apparent connection between my birth mom, Kathy, and me. We not only looked and spoke alike; we even had the same gestures! The latent love that we’d been unable to express to each other for twenty-three years blossomed the moment we reconnected. Of course my mom, Marilyn, knew intellectually that she was my mom and could never be replaced, but seeing Kathy and I so happy and complete was a shock.

After that, their relationship was strained, and understandably so. Over time I’m sure it would have relaxed into a cordial, if distant, rapport. However, tragic events would require them to put aside their own pain to help their daughter.

It was late afternoon in France when the planes hit

[Excerpted from Adopted Reality, A Memoir]

“Oui, je suis Americanne,” I said coldly to the young Frenchman in my most snotty high-school French. It was late, I’d spent the day walking an eerily deserted Versailles, and after being accosted earlier in the week by a bunch of hoodlums, I was in no mood for some greasy flirtation. It was an hour’s ride into the city, and I was rushing to meet my birth mom, Kathy, by five o’clock.

“Je ne comprends pas. Les Towers?” The planes flew into the Towers. I did understand, but surely something was lost in translation.

“OK, merci. Adieu,” I said absentmindedly, and stood up. It was my stop, and as I waited for the doors to open, I tried to figure out what the Frenchman was saying. The Twin Towers? Wasn’t that the World Trade Center? Wasn’t the World Trade Center where my uncle Tom worked? How could someone have flown a plane into a building? The very notion was ridiculous, surely I’d missed something.

I walked quickly to the Latin Quarter fountain where Kathy and I had agreed this morning, in French fashion, to meet. She’d been working the Textile Expo at the Convention Center, and when I walked up, she handed me her cell phone. I said, “I think my Uncle Tom works at the World Trade Center.”

“I know. They flew planes into the buildings, also one into the Pentagon.”

“The Pentagon? Mom works in DC.”

“I know. Call your mom; it’s about eleven o’clock in the morning there.”

I started to sob. “Oh my god, what if something happened to her?”

It took several tries, but I finally got through to my mom, and confirmed that she, my brother, and father were okay.

“What about Uncle Tom?” I asked.

“We can’t find Tom. No one can get through to New York City right now. Some people were evacuated, but many weren’t able to get out. The phones work on and off. Everyone is trying to help; they’re going to make signs to hang up around the Trade Center.”

“We’re hoping and we’re praying. Your Grandma Dennis is taking it really hard. She saw the planes fly into the Trade Center and started to get really upset. She’s almost eighty-five, you know. They slipped a Xanax into her tea, just so she doesn’t get worked up and have a heart attack. Grandma keeps on saying over and over, ‘He was the best we had.’”

I felt bad for Grandma; no mother should be alive for their child’s passing. “Mom, I just feel so far away.”

I was distraught over my uncle’s death. I pictured him caught in the top floors of Tower 1. No one received a call from Uncle Tom that morning. Why didn’t his cell phone work? Did he perish instantly, or was he trying to find a way out? Did he jump, or spend his last few moments trying to help others? He had two young children and a beautiful wife. No, I decided, he wouldn’t have jumped.

Did he get to the roof top, only to find that helicopters were unable to land? Did he get to a stairwell, only to have it collapse? Following the 9/11 commission, we learned that there are no known Tower 1 survivors who were above the crash zone. But still, there were so many questions left unanswered.

At the time, though, Kathy and I were stuck in France and we just wanted to be Stateside. I was suddenly, intensely patriotic; I was done with French-anything. I was crying constantly, for not being home, for not being with my family, for my Uncle Tom. And without my mom, it was Kathy who consoled me.

Like any good mother, she also sprang into action. She woke up before 5 a.m. each morning to be ready to call the airlines to book the first flight back home. The moment the flight restrictions were lifted a couple of days later; we got on a plane, any plane, as long as it got us back to the United States. She got us home.

A story for another day

Actually, the story doesn’t end there. The real connection between my two moms developed a month later when they found out I was in a mental institution, caught in a delusion in which I believed I was a bionic spy responsible for the terror attacks.

My mom stayed with Kathy in San Diego for the time I was in the hospital. The shared disaster of their daughter losing her mind allowed them to put aside any differences, and to work together to help me regain my sanity.

Where were you on 9/11? Are you tired of all of the rehashing, or does it help your healing process? I want to hear what you think! Please comment below … 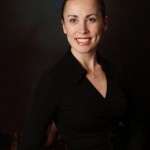 Laura Dennis currently lives in Serbia with her husband and two children. You can learn more about her adoption, reunion, and descent into insanity in her memoir, Adopted Reality, available on Amazon.com and Barnes and Noble.