A few years ago, when we were still living in the Pacific Northwest, I saw this cool idea somewhere.

Fill balloons with coloured water, freeze them, and place the resulting coloured orbs of ice along a snowy sidewalk. I thought it was such a neat idea and tucked it away in the back of my mind to do when we returned to Canada. This year, with all the kids coming for Christmas, I thought it would be neat to put the coloured ice balls out before they arrived.

In mid-December I bought some balloons, filled them up with water, coloured them red or green, and set them on my deck to freeze. Then I waited.

The December temperature remained above freezing and the snow all melted. Some of the balloons sprung a leak and my deck took on a reddish tinge. 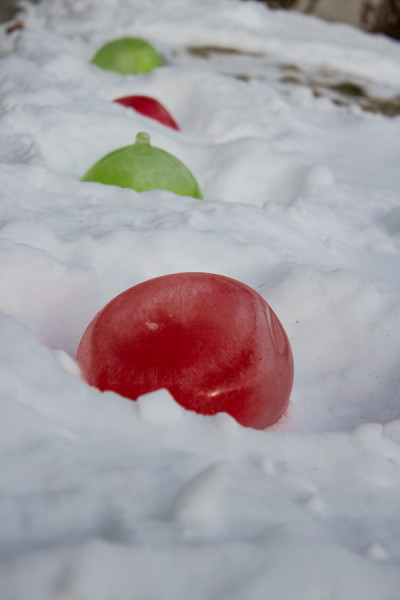 A couple of days before Christmas I brought the balloons inside and put them in the freezer thinking I could set them outside and they would survive for a short while anyway.

Christmas came and went, a good time was had by all, and I didn’t get a chance to put the ice balls outside.

Then it finally snowed again and we were plummeted into freezing temperatures.

So yes, I know it’s January, and I’ve just put frozen orbs of red and green ice balls in my yard. That’s just how we roll in the unpredictable Canadian winter.