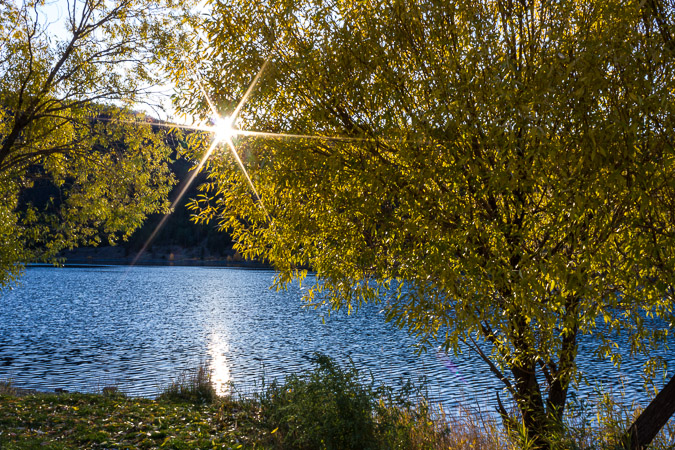 In late-August the leaves on the trees in my neighborhood started to show the first signs of turning color. It was easy to miss the subtle change, and I did for many years. Now I’m in the autumn of my life and sense a kinship in the shift.

The intensity of summer and the almost desperate drive to fit as much as possible into long and loud days gives way to a season in which we can let go and fall gently into a time of simply being. It’s the in-between season. We need a time to rest; it’s to our detriment if we don’t.

And yet September is also a time of beginning. It seems backward somehow. While I’m pulling plants from my garden and tossing tomatoes in the freezer because I’m too tired to do anything else with them, the world says “get busy” and “it’s time to get moving”.

The first day mindset started for me when Mom woke me up early one morning for the first day of nursery school, and lasted through twelve years of public school, college, and then my children’s first days. It is deeply ingrained. September still feels like a season of kick off—and it is, with ministries and classes and all manner of things.

For years, I turned this season of abundance, one in which I was weary from all the doing, into one of pushing through. With barely time to catch my breath much less get a second wind I propelled forward into a new season. And it was good. Exciting even. I was in sync with the people around me and we were all progressing. But I was too busy to notice the first subtle color changes in leaves and I dreaded the appearance of the first crispy leaves falling to the ground.

I’m sixty now, and I see life through a different lens. One silent morning my reading takes me to the first psalm, one I’ve read countless times before. Scribbled notes in the margin of my Bible remind me of wisdom I gleaned from these words in the past but I see something different now in how the psalmist describes those, like me, who seek to follow our Creator, as “trees planted along the riverbank, bearing fruit in season.”*

We are in the season of fruit-bearing where I live. Delicious plums, peaches, and nectarines, are abundant but the apricot harvest was a bust. When horticulturalists announced there would be no apricots due to the weather pattern of last winter, I was dismayed—and I don’t even like apricots. But we like our modern-day ability to have anything we want any time we want it and, like children, we don’t like being told we can’t have something.

Fruit crop failure happens—those who study these things say it does every five to seven years, and it is good for the trees. In barren years the nutrition is absorbed into the tree rather than used to produce fruit, leaving the trees stronger and healthier for future fruit-bearing seasons.

It’s apple season now. The aroma of sweet cinnamon-y crisps, cobblers, and pies fill our kitchens as pots of soup bubble on our stoves and the first wind-blown leaves dance in the yard. The trees, so generous with their fruit (save for the apricot trees), will soon drop what isn’t picked and then let go of crisp red and gold leaves. They’ll stand bare, waiting for winter’s cold and snow and a season of dormancy. I wonder: what if there’s wisdom in the trees for me?

Am I meant to be perpetually fruitful or does my human self require a season of dormancy too? Does fruit-bearing at sixty look the same as fruit-bearing at forty or eighty? Can a season of barrenness be beneficial now and then? I think about the rhythm of the church year and wonder if, in the liturgy of the seasons, there is something for the human as well as the holy and if they are, after all, the same.

I open my journal and scribble some thoughts about fruit and seasons and the weariness I feel as we head into this in-between time. Maybe some seasons are best spent abiding. I pay mind to the subtle change of the leaves on the trees as I drive into our neighborhood and appreciate the opportunity to pay attention as autumn is ushered in, trusting that my questions work themselves out during the quiet of the in-between season.