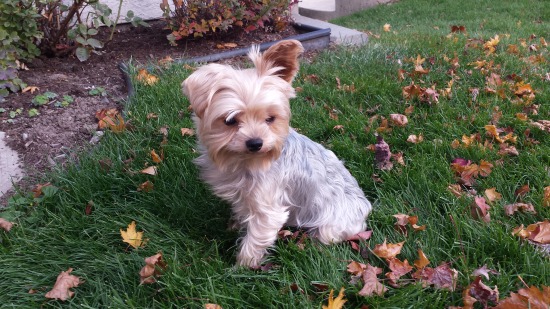 It was a pleasant morning, a brisk five degrees Celsius outside–with the wind chill it felt closer to zero–and the sun was breaking through the clouds. It was cool enough for a sweater, maybe even a jacket, cool enough for most folks to need a pair of shoes outside, certainly cool enough that one wouldn’t expect to see a barefoot woman running down the cul-de-sac.

We share our home with a little Yorkie named Maya who has big brown eyes capable of enticing us to do her bidding at any given moment, and a personality so sweet it’s impossible not to love her to pieces. This morning I was puttering around the house and noticed her sitting on the arm of the sofa in the library looking intently out the front window. I thought she had found a sunny place to stretch out or that she was watching the last of the autumn leaves fall from the maple tree in the front yard.

A few minutes later I was in the kitchen when I heard the click-click of her little paws coming into the room. She stood in front of me and looked up with those beautiful eyes attempting to perform a mind meld to convey her wishes to me.

She immediately scurried in the direction of the front door, looking back at me to confirm that I had understood her message.

“Okay, let’s go outside then.”

It doesn’t matter what season it is I live in bare feet and I concede to wearing shoes only when I leave home. Regardless of the weather, when I step out on the front step to let Maya out I am barefoot. She does her business and at this time of year, not fond of the cold weather, quickly turns tail and hurries back inside for a treat. This morning she had something else in mind though–another, dare I say devious, reason for wanting to go outside–and as soon as I opened the screen door she bolted. Down the sidewalk and around the corner of the garage, she was gone in a flash.

“Maya!” I called as I hurried down the sidewalk worried that her attention had been taken by large dog or, worse, a coyote or bear.

I rounded the corner of the garage in time to see her bolting down the cul-de-sac toward the common parking area chasing after a magpie that had been spooked from the tree in our front yard when I opened the door. There was nothing to do but go after her–bare feet and all.

At least it was late enough in the morning that I was dressed and fairly presentable. A few weeks ago when Gerry was out-of-town I let her out just after dawn, still wearing pajamas and with my hair askew, only to be greeted by my next door neighbour’s son who was walking out to his car. We exchanged perfunctory greetings, I urged Maya to hurry up, and as quickly as possible slid back into my house where I took a quick peek in the mirror to see just how bad I really looked. Trust me. The image that I saw in the mirror wasn’t pretty and the vision of that early morning greeting probably scarred the retina of that gentleman permanently.

This morning as I ran down the street, my bare feet cold on the pavement, the garage door of another neighbour began going up as I ran past and I offered a quick prayer of gratitude that I was at least dressed and this neighbour was spared the vision of a screaming banshee running down the cul-de-sac in her night attire. I could only hope he wouldn’t notice my bare feet.

Maya stood under a tree in the common area, her head tipped up, barking madly at the magpie. The bird flitted around on the branches, mocking her I’m sure, as my Yorkie scolded it and warned it never to return the tree in her front yard again. Satisfied that her message had been conveyed, Maya finally turned toward me and began prancing back toward home as if nothing had happened.

I tried to avoid the gaze of my neighbour who was fiddling with something at the back of his garage as I gingerly tip-toed across the pavement toward home and we arrived without further incident. Maya went right to the spot in the kitchen were her treats are kept and looked up at me expectantly waiting for her post-potty treat.

“You don’t even deserve a treat after that little episode”, I grumbled.

She looked up at me with those big eyes, innocent as could be, as I begrudgingly reached down and handed her a treat which she took delicately from between my fingers. That she took it so gently was perhaps her acknowledgment of the folly of her behaviour since she often very nearly takes a piece of my finger along with the little treat.

The lessons gleaned from this morning’s episode could be many. I could keep a pair of slippers at the front door to slip on when I take Maya outside. I could pull on a house coat, and perhaps a hat, in the morning if I’m forced to go outside before I’ve showered and dressed for the day. I could slip a long leash on Maya before we go outside to prevent a magpie chasing episode or I could scope out the tree for rogue birds before opening the door.

I could, and might, do any of these things, but chances are pretty good that if you live in my neighbourhood at some point regardless of the weather you’ll see me outside barefoot, and possibly pajama clad, waiting for a little Yorkie to perform her morning ablutions or scold a cheeky magpie.