When I first heard about Moroccan Preserved Lemons I was intrigued. They sounded exotic, a unique ingredient to use in new recipes, and simple to make. I had to try them.

It was mid-October when I posted a photo of the mason jar with preserved lemons that I had just assembled on Facebook. The response was immediate. Some people had purchased them at specialty food stores, loved them, and wanted to know how to make them. Some had never heard of them but found the concept interesting. Some thought I had gone over the edge in my desire to preserve food and wondered why in the world I’d be preserving lemons!

Fast forward three months and I’ve used the entire jar of preserved lemons up and have just started a new batch. We love their unique flavour and I’ve used them in various ways over the past few months. 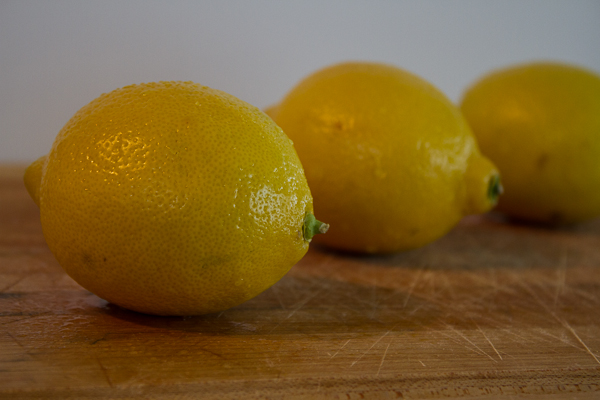 Prepare a quart-sized mason jar by washing it well and putting a tablespoon or so of kosher salt in the bottom.

Wash them well and cut off the ends as shown in the photograph below. 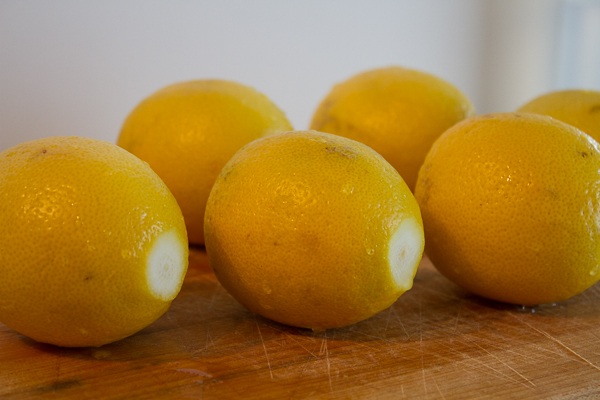 Cut each lemon into quarters–not quite all the way through. Put about a tablespoon of kosher salt in the middle and squeeze the lemon together. Make sure you do this over a bowl because you’ll end up with lemon juice when you squeeze the lemons and you don’t want to lose it. 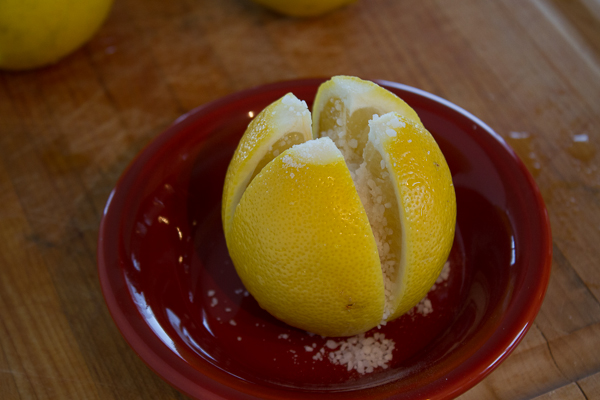 Put each lemon in the mason jar as you go. Smoosh them down after you add each lemon to begin extracting juice from the lemons. I use the muddler I bought last summer to make mojitos with.

Continue adding lemons and juice, smooshing until the lemons are covered by juice. If you don’t find that you have enough juice to cover the lemons–and it’s important that they are all covered–you can add a bit of bottled organic lemon juice or boiled water. I’ve always gotten enough juice from the lemons and haven’t had to do this.

Add a tablespoon or so more of the kosher salt to the top of the jar and put the lid on.

In order to ensure the lemons are completely submerged I add a couple of non-metalic things like porcelain chopstick rests to the top of the lemons such that the lid smushes them down submerging the lemons.

Leave the jar on the counter for a about a month checking now and then to make sure the lemons remain submerged by juice, and periodically tip the jar up and down to combine the salt.

After a month when you’re ready to use them, take the desired amount of lemon out, run it under cool water to rinse off the salt and remove the pulp and enjoy!

I read conflicting opinions about whether or not you should refrigerate the lemons after the one month fermenting period. Some folks refrigerate them, some wait until they get the flavour they like (the flavour continues to change over time), and others just leave them on the counter. I chose to leave them on my counter over the entire three-month period I used them and they were fine. If it was the middle of summer and my house was not air-conditioned I may choose to refrigerate them.

They last a long time–a year or two I read–but I can’t seem them ever lasting that long in our house. Stay tuned for future posts about how I used them.