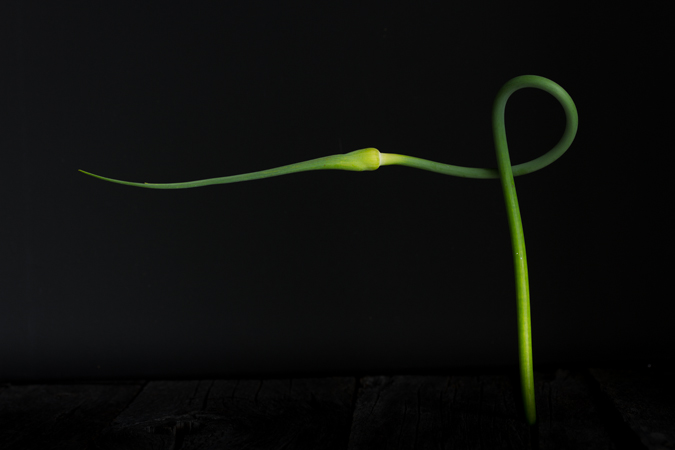 I cut scapes from the garlic in my community garden plot yesterday and, along with fresh cut basil, made pesto. I flash freeze it in dollops and toss the frozen nuggets in a ziplock bag for future use. This year I decided to try a new recipe for pesto pizza too.

We’re at the start of a heat wave (temperatures are forecasted to hit 40C / 104F later this week) and Gerry was amused that I was turning the oven on while the air conditioning was running. I see no problem with this. That’s why we have air conditioning, isn’t it?

My thoughts returned to days gone by (pre air conditioning) when I’d boil potatoes and eggs early in the morning to make salad and fry chicken for a cold supper later. We kept curtains and blinds drawn in the heat of the day—to this day there’s something comforting about a darkened house in the middle of the afternoon.

I remembered the torture of trying to sleep on nights when it never cooled down, sitting outside long into the evening because it was too hot in the house, kids getting cranky (adults too), the noisy brrrr of water coolers and fans, and feeling flat-out exhausted by the heat.

Sometimes I’d pack up the kids and we’d go to the mall, not to shop but to cool down. In later years, I was thankful for the gift of spending the day in an air conditioned office—even if I had to wear a sweater because it was just too cold.

One summer, I drove alone from Saskatchewan back home to B.C. in the middle of a heatwave after the AC in my car stopped working. Windows wide open, I drank bottle after bottle of water, purposely pouring  some over myself in the process.

Whoever invented AC, I tip my hat to you. You made life bearable—much easier, in fact. I didn’t have the pleasure of meeting you until soon after Gerry and I were married and he introduced us. I’m so glad he did.