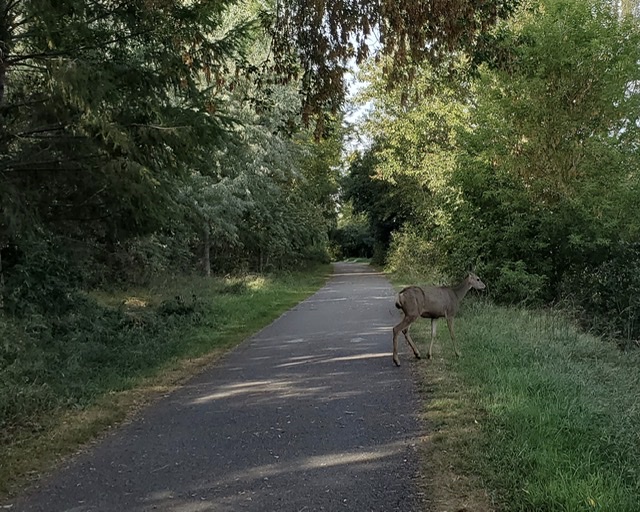 It’s not uncommon to see deer where we live. They meander in the field behind our house, sometimes standing on their two rear legs as they reach for tasty morsels on high branches. They make salad of tulips in my front garden in the spring, to the extent that I’ve given up trying to grow them. They’re not uncommon but a deer sighting always makes us pause and watch.

One day this spring, when Makiya was here, and we were navigating early days of the pandemic, we were doing something together when Maya went mad barking in the den and Makiya went to investigate.

Before I could join her at the window she cried out: “And another! And another!”

Together we watched six deer on impossibly thin legs, their large ears alert and likely picking up the sound of our barking pup, meander up from between our neighbour’s houses, past ours, up the cul-de-sac and out of our vision. It was a special moment we shared.

Now, I’m driving down the hill that leads from our neighbourhood toward the East Trans Canada Highway and I tap the brake as I spot one coming toward the road from the right, making signs like she’s going to step out onto the road.

A man walking up the hill stops when he sees her. He lifts his phone and takes a photo. The deer, maybe disoriented to find a busy road in the midst of her wilderness walk, pauses. She hesitates, then turns around and heads back into the bush. It’s only a moment, but one that connects the man, me, and the deer before all three of us carry on with our morning.

I’m heading to my favourite park to walk. I know. It seems somehow counterintuitive to drive somewhere to go for a walk, but there you go. I prayed before I climbed in the car, melancholy and bearing that weight again: “Let me see you”.

My ask isn’t for a burning bush or a booming voice or anything other than a glimpse of the heart of God. I believe in metaphor and poetry, and I’ve seen the divine in the ordinary in the past. I could use the encouragement of such an encounter today.

”Was it the deer?” I wonder as I drive through town toward the park. “Was there something about seeing the deer that I missed?”

Because, while it caught me off guard and it was cool, the way seeing a deer always is, it was nothing extraordinary. If there was a message about grace or my belovedness or anything else in the deer encounter, I missed it.

At the park, I start out on the native plant walk—a fancy name for a trail that winds around the back of the island through a familiar area where ghosts of memories linger. It’s less busy on this trail. Perfect for prayer walks and contemplation.

There’s rustling on the side of the path, and through the trees I catch sight of two deer—a mama and a baby. I slow my pace so as not to startle them. Mama deer comes out through the trees, pauses at the path, and turns toward me. She’s no more than eight feet in front of me. I stop and in my mind respond to her look: “after you”.

Mama and Baby step out onto the path and begin walking down it. I follow at a much-slower pace, watching. There’s still rustling in the bushes beside the path and I think another deer must still be in there. The baby turns back, returning to the sanctuary of the bush, while Mama carries on down the path.

A man, another walker, catches up to me and we walk together for a while behind the deer.

”Follow the leader!” he jokes as we two keep a slow pace behind the deer.

Then, tired of being slowed up, he increases his pace and moves out in front of me to pass the deer. A woman coming toward us in the opposite direction keeps an eye on the animal but makes no sign of slowing down.

And so, the man and the woman pass by and the deer wanders off the path toward the river and I’m still almost tiptoeing and made breathless by the encounter. Magical. Time stopping. Wonder-full. That’s how I experience it.

The deer is out of sight now, and I carry on down the path. I’m thinking about the slow, intentional, graceful movement of deer going about their morning business foraging for food, not overly troubled by walkers sharing their space. Aware of us, but not afraid of us.

Bears are a danger at this time of year as they wander neighbourhoods looking for trees fat with unpicked fruit, gardens still producing, or unsecured trash cans. It doesn’t always end well when bears get too comfortable in our neighbourhood. Same with cougars. I heard of one wandering the streets this week in my hometown, and it didn’t go well for the cat either.

But we’ve learned to coexist with deer, and they tolerate us in the spaces they call home. It’s unlikely I’d be able to walk up and touch a wild deer but I’m happy to enjoy watching them from a distance, with their strong stick legs, dark and deep eyes, large velvety ears turning like radar at the slightest sound.

”Was it the deer?” I ask again, silently, as I round the corner past the bat house toward the opposite side of the trail.

Later, I arrive home refreshed by my walk and prepare lunch for Gerry and I while he sets up the chessboard. I don’t know about there being anything supernatural in my deer encounters but I do know that ofttimes the ordinary moments, upon examination, are packed full of extraordinary.

Maybe this one was, or maybe it wasn’t, but the pause was rich with fodder for contemplation for the rest of my walk.