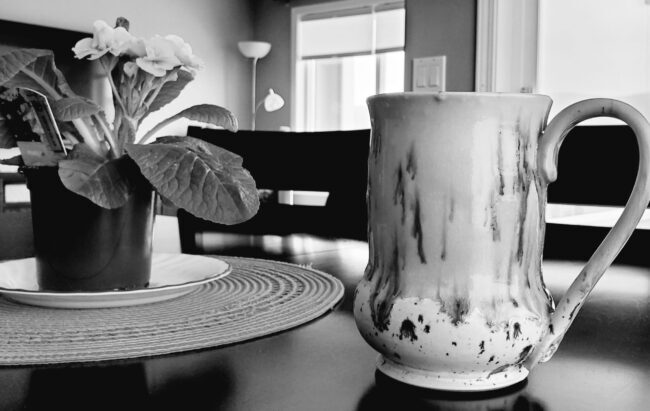 We go to Costco to buy popcorn.
And more.
Always more.

After deciding I don’t need them
I loop back
and pick up a yellow box
of Dad’s Oatmeal Chocolate Chip cookies.
(48 individually wrapped packages containing two cookies each.)

Because school lunches.
And childhood memories.

When we get home I brew tea
and dip a cookie into my steaming mug
recalling the taste and soft texture of one of these cookies
after dipping it in a tiny china cup
of hot Orange Pekoe tea.

My chocolate chili chai
adds a different layer of flavour,
but it tastes of comfort all the same.

I first became aware of this poem by USSR-born Ukranian poet Ilya Kaminsky when I heard Padraig O’Tuauma read it last summer on his Poetry Unbound podcast. This morning, Tonia Peckover, by way of her gentle blog, brought it to my attention again. These words speak to me of the paradox of this strange time and space where my heart hurts for those affected by war while, on the surface, my life remains relatively stable and safe.

We Lived Happily During the War

And when they bombed other people’s houses, we

protested
but not enough, we opposed them but not

enough. I was
in my bed, around my bed America

I took a chair outside and watched the sun.

lived happily during the war.