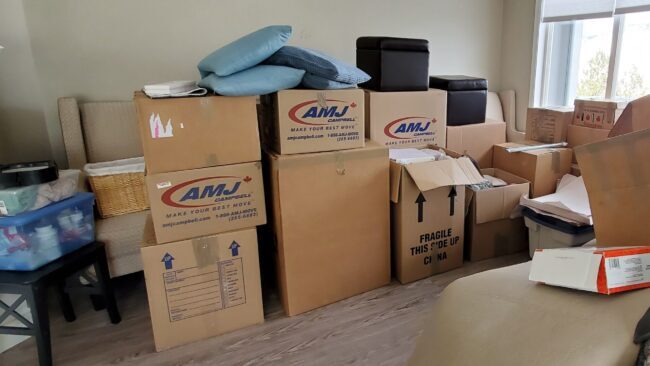 Gerry has taken the dogs to the groomer and I’m sitting here alone in the home we’ll be leaving behind in six days. I see boxes everywhere. I smell the self-cleaning oven going through its cycle. I hear—nothing. It’s so, so quiet. I’ll never be absolutely alone in this house again, and it’s a good time for reflecting . . .

. . . on the day we moved in, newly retired, and returning to the city we had called home most of our lives, thankful for Gerry’s brother and wife who came to help us settle in on moving day.

. . . on the fun we had here with our granddaughter at many Camp G and G sessions. The plays she wrote and that we three performed under her very strict direction. The time she went around saying goodbye to everything before we climbed in the car to deliver her back to her mama in Prince George. “Goodbye, couch. Goodbye, bedroom. Goodbye, flowers.” The cookies she baked. Dance parties. The time she got up at 3 am to make and serve me breakfast in bed. Her altar ego, “Lexie”, also known as “the tired waiter”, who used to set the table and fill water glasses before dinner.

. . . on loved ones around the dining table—often enjoying Gerry’s signature crépes.

. . . on the many, glory-to-God-giving sunrises I watched from our bedroom window.

. . . on getting accustomed to the sound of scraping snow shovels in the morning again, having spent seven years in the Pacific Northwest where there was no need for such a thing.

. . . on the torture of enduring home improvement projects.

. . . on sitting in the hot tub enjoying good conversation and sharing laughter with Gerry.

. . . on the morning when I was reading in bed and saw a mouse run across the floor! Scream!! I made Gerry sit on a chair to guard the bathroom door so I could shower and then perched on the kitchen countertop when he drove down the hill to buy traps.

. . . on sharing the kitchen with my daughter.

. . . on the closet shelves and kitchen backsplash our son installed shortly after we moved in.

. . . on watching deer—and one time a little bear—wander by the backyard.

. . . on the view from our bedroom and living room windows and our back deck.

I’m tucking these and other memories away for safekeeping alongside those from other places I’ve called home. They’ll remain treasures long after we’ve settled into our new home—the one I’ve waited a half-century for.