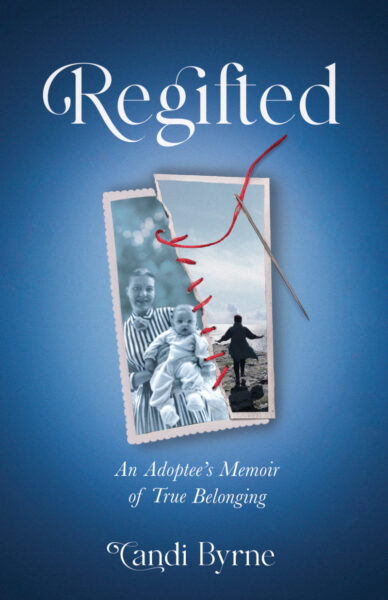 I met Candi Byrne about a decade ago at a Story Circle Network conference in Austin, TX. We sought one another out because we had learned, in emails exchanged prior to the conference, that we were both adoptees. Adoptees understand adoptees. Though our stories may be different, we get one another.

I wanted to have people. To be of a people. To be one of the bright stars in a constellation of people, twinkling in and among the other stars. I longed to have strong roots, deep roots, grounded roots to sustain and support me as I grew and thrived.

I was thrilled when Candi’s book was available for pre-order and couldn’t order it fast enough! I’ve read a lot of memoirs written by adoptees and, have just finished reading Candi’s, Regifted: An Adoptee’s Memoir of True Belonging. Like many adoptee stories, Candi’s story is mine—though aside from our adopted-ness, the only real thing they seem to have in common on the surface is that our birth mom’s name was Mary.

I wanted to know what I think most other adoptees—hell, what most everyone wants to know: Who and where did I come from? Who do I look like? Who are my people? What is my history?

I. Love. This. Book. It’s a real and raw story told as only Candi can—with a little sass thrown in.

For my entire life, I’d carried the message that I wasn’t worth fighting for—I believed it on a cellular level . . . and I had proof. My birth families had given me away.

Take my advice and run, don’t walk, to get a copy for yourself. Canadian Amazon link. US Amazon link.

Candi Byrne is a gregarious introvert, nomadic homebody, and pragmatic woowooist. She lives in an enchanted forest on the south side of North Mountain in the Eastern Panhandle of West Virginia. Her cozy, colorful cottage contains a bounty of art supplies for the “Magic on the Mountain” creative retreats she facilitates, as well as the “Let’s Get Messy” sleepovers she has regularly with her two granddaughters, who live over the creek and through the woods. She lives in Martinsburg, WV.