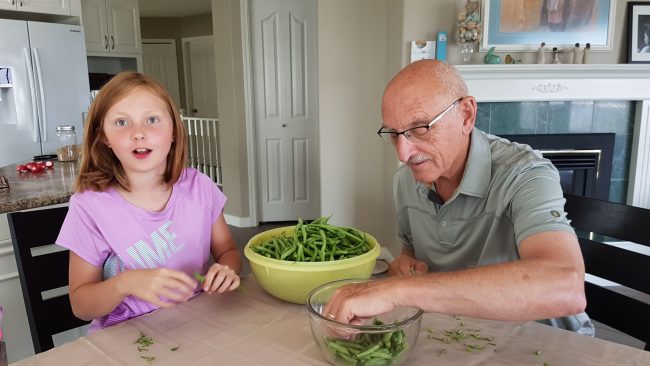 The morning harvest is plentiful: Swiss chard, beans, kale, salad turnips, and basil. While I busy myself tending to it all and making pesto, I put my helpers to work snapping beans. After the produce has been tended to, we enjoy lunch and a game of Life, then head out of the air-conditioned house into the Kamloops heat for some fun.

We wouldn’t have gone had we known—Grandpa, Makiya, and Grandma are not fans of large crowds of people and lots of noise—but we arrive at the downtown park for an afternoon of beach and playground time to find that there is a Buskers Festival going on.

We set up our little spot near the playground, and Ladybug Girl runs off to do some gymnastic-like things on the bars and on the grass in front of us. It’s fun, but we can’t help but be distracted by the noise and activity. We decide to move to a quieter area near the water.

We take a circuitous route, passing by vendor booths (and not giving in to the temptation of mini donuts), and as we veer off into the grass toward the beach, we spy a crowd around a couple of performers doing acrobatics.

So we move closer, set up our folding chairs and become part of the audience. We all enjoy the performance that pairs acrobatics with juggling daggers and fire, hula hooping with thirty-six hoops at the same time, and a good measure of audience interaction and participation.

When it’s over, an excited Ladybug Girl runs forward to drop a few dollars in their bag. As we make our way toward the beach, our chatter is all about how much we enjoyed the short show and how serendipitous it was that we came to the park this afternoon.

Grandpa and Makiya take a dip in the water, Ladybug Girl practices headstands and cartwheels for a while, and we decide it’s time for ice cream (because, goodness knows, we haven’t had enough ice cream lately!) so we pack up and head to Wendy’s for chocolate Frostys. It’s almost supper time but we decide it will be fun to eat desert before supper. (There is concern that this means we won’t have ice cream later when we watch Masterchef, but it turns out to be unfounded.)

And so, Frostys in hand, we settle in the backyard: Grandma and Grandpa with books for a few minutes of rest as Ladybug Girl pulls out the croquet set and plays a few rounds with characters who have become regular visitors here over the years.

Day winds gently down and gratitude permeates every nook and cranny.