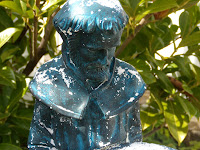 My car had to go in for some quick work today so we made arrangements that I would drop it off after work, head down to Starbucks, and Gerry would pick me up after he got out of work.  It was a great plan – a Carmel Macchiato, my notebook and favorite pen, and an hour or so to write.  What could be better?

All went well until I arrived at Starbucks and sat down at an out-of-the way table and pulled out my notebook.  The place was hopping, but I am pretty good at tuning out background noice when I have to, so I wasn’t worried about being able to write.

Then I saw, and heard, a young boy.  Now you know that I love little ones; I don’t fault this little boy in the least for his behavior.  His mom sat in one of these big soft chairs they have in Starbucks chatting away to a friend while her child ran wild.  He played with the door while she weakly chastened him and took no action to actually make the behavior stop.  He hid around a corner and called at the top of his lungs for his Mom to come and find him. At one point she took him to the bathroom and when his business in there was finished, he came running out of that room leaving the door to slam behind him, screaming yet again.

I was sorely tempted at one point to stand up and chasten the child myself.

I didn’t; I did my best to ignore the undesirable behavior.  I did get some writing done, but my nerves were frazzled by the time Gerry arrived to pick me up. It wasn’t quite the serene picture I had imagined it would be.