The other day I spent some time poking around in an old suitcase containing ephemera I gathered from my grandma’s attic many years ago. The suitcase contains photographs and letters well over a century old. Treasures.

I read something this morning that broke my heart. A letter written in December 1916 from a son, Richard, to his mother. Richard was my grandmother’s brother and he wrote from Saskatoon, Saskatchewan to his mother in Mather, Manitoba. 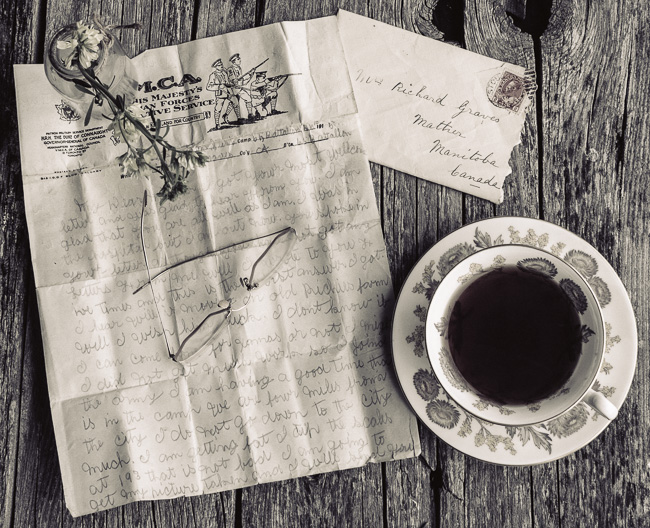 “My dear mother”, the letter begins. “I got your most welcome letter and was glad to hear from you.” He inquired after his siblings. “I hear Will is moving on old Richie’s farm. I wish him luck. Is [sic] Abbie and Frank going to get married?” Richard likely knew his mother was missing him. “I don’t know if I can come home for xmas or not.” I felt chills as I read the next sentence: “I did not get much work so I joined the army.”

He goes on to say “I am having a good time in the camp. There is [sic] 300 of us to go to the old country after New Years and I guess I will be with them.” Perhaps he was trying to reassure his mother when he wrote that “It is all easy to me and I get along fine.”

Then the last paragraph. “Tell the girls and Will to write. Give my love to all and a lot for yourself.” The last sentence brought tears to my eyes: “Good bye mother dear xxxxxx”.

That suitcase contains death certificates for Richard and his younger brother George. George, presumed killed in action less than a year after this letter was written. Richard a year later–just two months before World War I ended. I can only imagine the horror these two young men, and so many more, endured defending our country. I can’t begin to imagine the heartbreak of their mother. These two sons weren’t the only ones of her children who predeceased her.

Perhaps this wasn’t the last letter Richard wrote to his mother but I imagine he signed every one the same way: “Good bye mother dear”. Eventually one of those letters was the last one and his final words expressed how dear his mother was to him. Maybe those words comforted her in her grief.

One hundred years later we’ve become so casual with our communications. A quick text message now and then, a Facebook status update, an occasional phone call, these are the things we rely on to keep in touch with one another. Email, the way to connect with one another not so very long ago, seems to take too much time and is becoming a thing of the past in personal communications. Handwritten letters are almost unheard of.

In this era of instant–and constant–communication it’s great to have the technology to keep in touch with people we might otherwise lose track of but as we’ve come to rely on that which is instant and quick I fear we’ve lost some of that which is deeper and lasting.

There’s so much nonsense in the news these days. Crazy things. Scary things. Maybe instead of giving so much attention on the tragedy we could take put more time into telling our loved ones how much they mean to us. After all, one day it will be our–and their–last day. Perhaps we could try being kinder and more respectful to one another; we could drop our guard just a bit and send a note to someone just to let them know we’re thinking about them and that we care.

Dear mother, dear father, dear son, daughter, friend, aunt, uncle, cousin. I’m thinking about you. I care about you. Give my love to all and a lot for yourself. It wouldn’t be hard; it wouldn’t take long to pen a quick note in a card and drop it in the mail to someone. I’m going to do it. Join me?