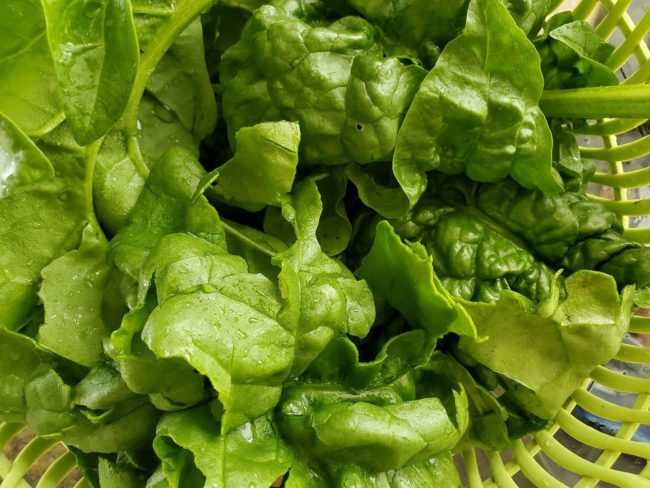 In honour of the special occasion, Gerry takes an early morning trip to Costco during senior hour (the first Costco run since early March) to buy feta, and a handful of other things we’ve been missing (And yes. Toilet paper. The first package to come into our home since the madness began.)

Now I snip spinach and tuck crisp, fat leaves in a bag while I think about salad. We try to eat seasonally and haven’t enjoyed a green salad for many months. I’ve been eyeing this little patch of spinach since I spied the first green shoots when it was still too cool for anything else except fall-planted garlic to grow in the garden. Now it’s time.

At home I pull out my big yellow Fiesta pasta bowl and fill it with washed and torn spinach leaves, add blueberries that I flash froze last summer, and sprinkle feta on top. Then I pull out my wooden salad tongs and toss the beautiful mixture together.

I make a vinaigrette with Canadian wild raspberry vinegar that’s been waiting in the cupboard for just such a day and extra virgin olive oil. As I drizzle it over the spinach, I think about a favourite quinoa salad and think I’ll make it sometime soon too.

Later we utter involuntary “mmmmm”s as we enjoy flavour of this simple supper of spinach salad and baked salmon Gerry brought home from his fishing trip last summer. Salad days are here again. It is the simple things like this that sustain me and block out the noise.