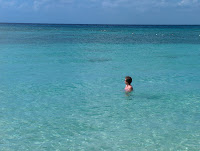 This morning I was awakened by a blood curdling scream. As I struggled to surface from deep sleep, I began to realize that I was the screamer. Gerry and I were both wide awake after that, and as I moved to get out of bed to begin the day he asked what I had been dreaming.

My reply was a mumbled, “stupid stuff”.

I had been dreaming that I was at a resort and for a variety of, mostly stuipd, reasons found myself unable to find my way to the beach. Sometimes one wonders why the subconscious mind entertains some of the things that come up in our dreams. Some of the reasons that I found myself unable to get to the beach last night could be classified that way – unusual and just plain stupid. The reason for the dream about the beach however, was much less mysterious.

I am living in an interesting place called pre-menopause. Many of my nights are spent alternating between feeling that I have been thrown into a furnace, then the ocean, and finally into a meat freezer and last night was no exception.

I had awakened earlier swimming in a sea of what someone has coined night sweats. Let me tell you, that doesn’t even begin to describe the experience of waking up with the feeling that you have fallen asleep in a lukewarm bathtub.

Finding oneself in bed and soaking wet is one thing, but what comes next is the sense of being stranded outside in sub-zero temperatures after finding oneself soaking wet from a lukewarm bathtub. Now that’s stupid!

A few months ago I purchased some pajamas called wicking pajamas that are called that, I suppose, because they are supposed to act like a wick and absorb the moisture in order to prevent the subsequent chills. I think I must have gotten a defective pair because they don’t seem to be working for me.

On the bright side, I had an excuse to pull out this great picture of myself in the ocean that was taken earlier this year in Mexico and to remember how much fun that trip was. It’s fun to reminisce about that trip, but tonight I’d rather look back to childhood days on the warm dry prairie.