A few years ago my batchelor Uncle died. He had lived in the same 800 square foot house where my Grandma had raised three children on her own his whole life.

After he died, I had an opportunity to venture into the attic. I had always wondered what was behind that door that we weren’t allowed to open as children and I was excited to find out.

What a treasure trove we found! There were so many things from the past! My mother’s school books, very old pictures, quilt blocks, irons (the real irons), coal oil lamps, and so on. 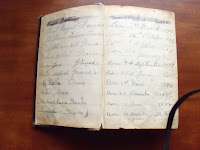 One thing that found, and have kept is the family bible. In this bible, are listed the dates of birth, marriage, and death of family dating back to the mid-1800’s. Tucked between some pages are the funeral announcements of some. I assume that these entries were made by my Grandma, and after her death by her son, my Uncle. I see my Mom’s birth date, the date she married my Dad, and the dates that they both passed away.

Conspicuously absent is my own birth date and that of my sister. I can only assume that the reason that we aren’t there is because we were adopted.

I have to say that it hurt not to find my name in that bible. That family is my family whether my name is in there or not. It’s a strange thing to be adopted and to come to grips with the whole family concept. It doesn’t happen overnight, and in some ways it is still in process.

No matter. I entered the date of death of my uncle into that bible and put it away. I consider it my family bible whether my name is in there or not.