We’re just home from the garden where I picked another bucket of green beans. I decided to grow them after I made dilly beans last year (with beans bought from the farmer’s market) that we enjoyed immensely. I wanted to grow my own this year and make some more.

I chose Venture Blue Lake bush beans and they’ve been great. I’ve been harvesting them for almost a week. We’ve had them for supper, I’ve frozen a few bags, and I’ve even enjoyed the tender young beans raw. These are not the green beans I remember from childhood (read: from tin cans, mushy, and generally yucky). 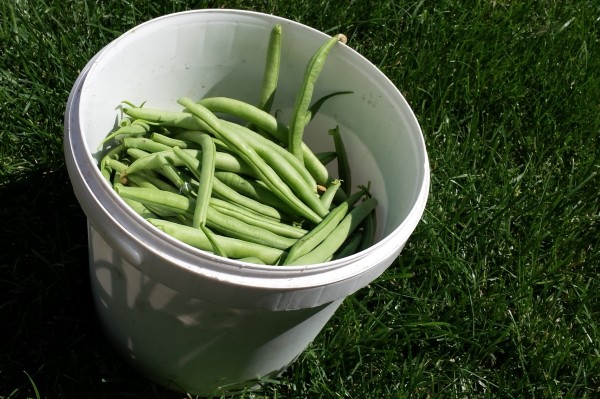 I had planned on canning this afternoon–dilly beans and more new potatoes–but I’m exhausted from too much time spent in the heat. Thirty degrees Celsius (that’s 86 Fahrenheit) is just too hot to be working in the garden. I usually try to get my gardening done in the cooler early morning hours but it’s Sunday and I have another commitment in the morning. The garden waits for no one, the beans needed to be harvested, and so mid-day gardening it was.

Anyway, I wanted to share a couple of photos to give you a sense of the crazy growth that’s happening right now. 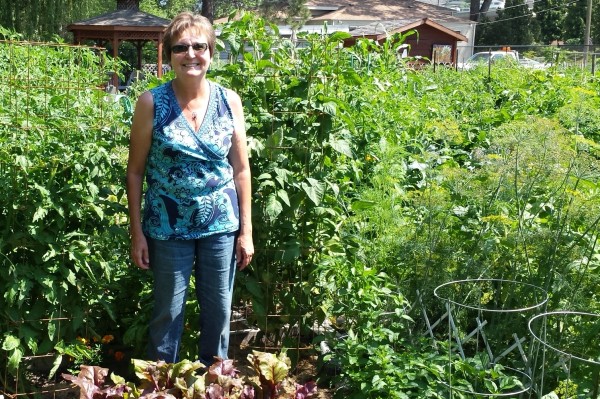 All of the tomato varieties are doing well. We’ve enjoyed the first of the sun-warmed Sungolds already and, as you can see from this photograph, one of my Brandywine plants is a titch taller than me! There are lots of fruit on the vine and we’re anxiously waiting for them to ripen. I’m thankful that Gerry built these heavy-duty cages for me this year.

Those are the Bull’s Blood Beets right in front of me. I harvested the other variety (the name of which I can’t recall and I’m just too dang tired to go and find the seed packet to check) earlier this week and, much to my chagrin, almost every single beet had been well-chewed by voles or some such varmint. So far, the Bull’s Blood ones have been spared and I put some cotton balls with peppermint essential oil among the plants as a deterrent. Will let you know how that works out. 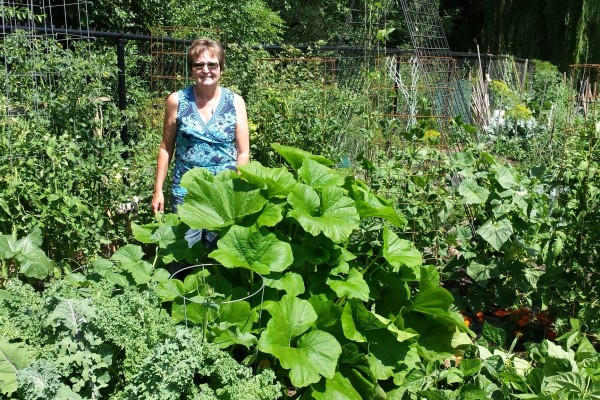 On the other side of the garden the Sunburst Scallopini squash has turned into a behemoth. There’s lots of blossoms and tiny squash forming; it won’t be long before we can begin eating them. You can also see the kale in front that’s we’re harvesting and eating regularly, and more tomato plants in behind.

The heat wave continues and the sky is already hazy with smoke from forest fires. It’s been a very dry year and, with the hot temperatures and many lightening strikes recently, it’s shaping up to be a bad season for forest fires. It is exactly like the Kamloops summers I recall from so many years ago.

Now, I believe there’s a spot on the lawn swing in the shade that has my name on it. I hope you’re enjoying your Sunday afternoon as much as I’m enjoying mine.