Things are beginning to wind down in the community garden. A couple of gardeners have already cleaned their plots out completely but there’s still lots of action happening in the Hoye garden. 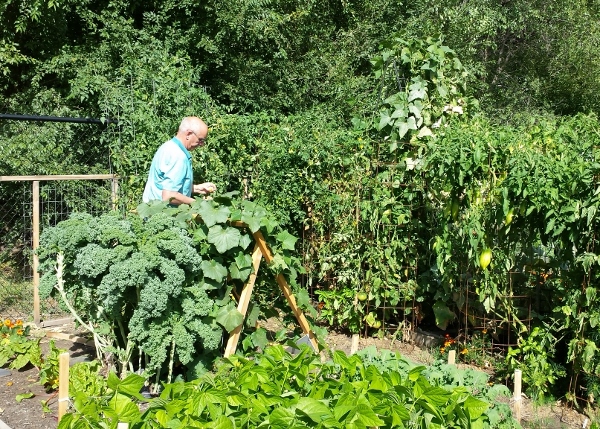 We’ll be eating the last lettuce we’ll enjoy this year for dinner this evening. I don’t buy lettuce out of season so it truly will be the last lettuce salad for us until spring. We’ll savour every bite of the crisp Drunken Woman lettuce combined with Yellow Pear and Sungold tomatoes, and diced cucumber.

Speaking of cucumber, I picked four more today that I’ll slice up with some dill weed I also harvested and put them in the dehydrator for more of those delicious cucumber chips. There are still more little cucumbers on the vine so we expect more to come before too long. 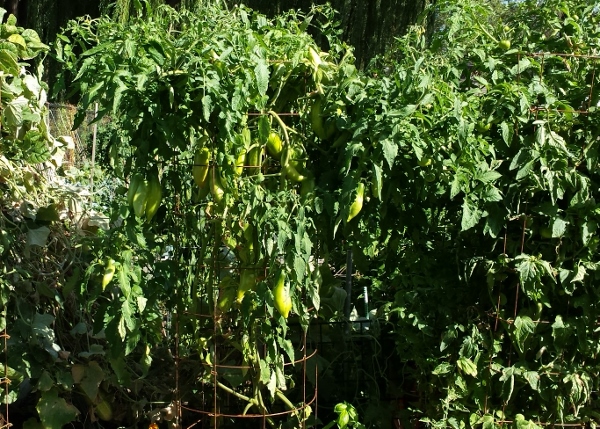 There are lots of green tomatoes still on the vines too. We pick little Sungolds and Yellow Pears daily. I’m throwing them in the freezer and will use them for sauces throughout the winter. There are a ton of green Federle tomatoes hanging on the vines–many people are mistaking them for peppers! I’m saving the ripe ones at home as long as I can until I have enough to warrant canning a few more jars. Lots of green Brandywines and Black Krims left too so, as long as we don’t get an unexpected early frost, I expect we’ll be well stocked with tomatoes for the winter.

I’ve been harvesting kale and chard and freezing what we don’t eat fresh. Still lots more of that left and the kale will be good until even after the snow falls. I’ve heard that it tastes even better after a frost so I think we might just test that theory out this year. 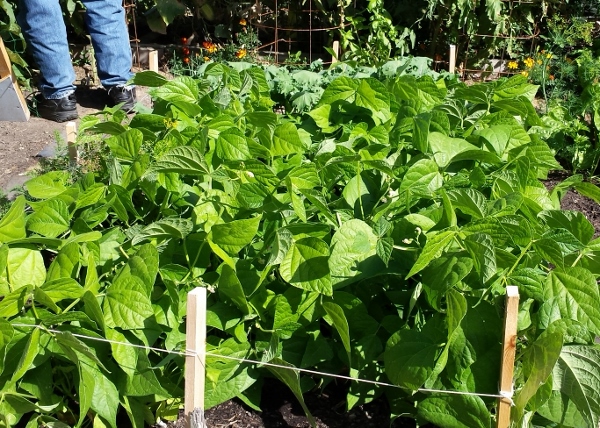 My second crop of green beans should be ready to begin harvesting in a couple of weeks. I can’t wait to enjoy more fresh green beans–some of these too will go into the freezer for winter soups and meals.

The deer-proof garden in our back yard is also winding down. The spaghetti squash vines are beginning to die off as is the delicata squash plant. The squash has been a bit of a disappointment–we’ll end up with just three spaghetti squash and one delicata–next year we’ll do squash in the community garden instead of up here. All of the herbs have done well and I’ve got jars of dried thyme, rosemary, oregano, sage, and chives tucked away and will be drying still more. There are just a few onions left in the garden–I used most of them in salsa and pickles. This was my first year growing onions and they were a big success. I’ll definitely grow more of them next year.

Sometimes as I survey the garden and think about the bounty on my canning shelf and in my freezer it’s hard to imagine that I spent a few restless nights in early spring worrying about how this year’s garden might turn out. We moved to a new plot this year were wary about the quality of the soil. Once again, my worrying was for naught and all turned out well–even better than I expected in fact. There’s a lesson there, isn’t there?

As the days lengthen and we sense fall in the air I find myself, for the first time in many years, looking forward to the change of seasons. I’ve worked hard over the summer. Slowing down, taking a little vacation, and returning to a quieter pace will be a welcome respite. I’m looking forward to having time to get back to my photography and writing projects–activities I had to set aside while I was busy with the garden and in the canning kitchen.

For me, this is what living a fulfilled retirement life is all about: Working hard at things that bring satisfaction like gardening, canning, and otherwise preserving summer’s bounty; then slowing down, enjoying the fruits of my labour, while turning back toward other creative pursuits like writing and photography. It’s a good life and I am thankful for it.