Two weeks ago, it was dark and raining lightly, as we drove the familiar prairie road toward Benson. When we turned off onto the dirt road leading to Queen Street and the main entry into the hamlet I asked Gerry to stop the car so I could snap a photo of the hamlet. 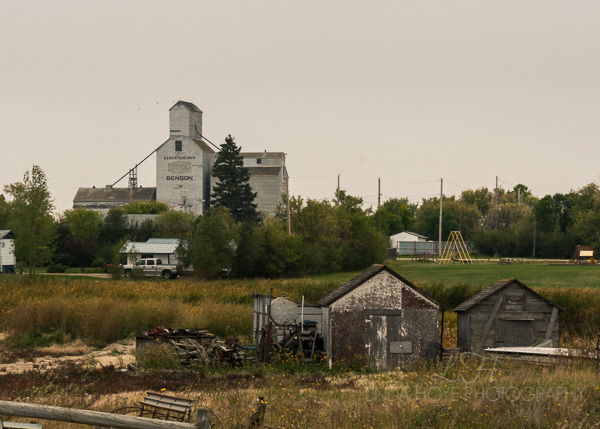 We drove down Queen street, turned onto Second Avenue, and drove toward Grandma’s house. I was apprehensive about what state I might find Grandma’s tiny house in given what it looked like four and a half years ago when we were there. I was also confused for a moment as we approached and I saw a brand new house standing there.

“They’ve torn it down and built a new one!” I exclaimed before I got my bearings and realized we hadn’t yet reached Grandma’s yard. And then we were there.

That troubling cement foundation I had first seen in 2009 had turned into a large structure tacked on to the back of the tiny house. Grandma’s house had been transformed into a Frankenstein-like monstrosity piecing together structures from different centuries into a single one meant, I assumed, to house oil workers. 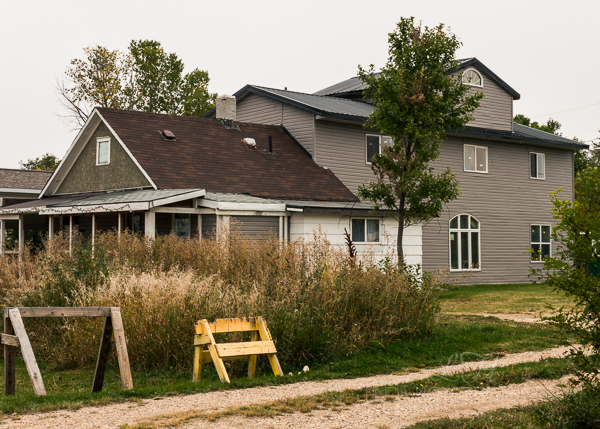 From the front, the tiny house didn’t look all that much different from it had when we had been there six years earlier; that is to say it hadn’t been fixed up, restored, or tended to. The windows in the new addition still had stickers on them and, while the exterior was sided, it appeared from my vantage point that the interior was not yet finished much less inhabited. 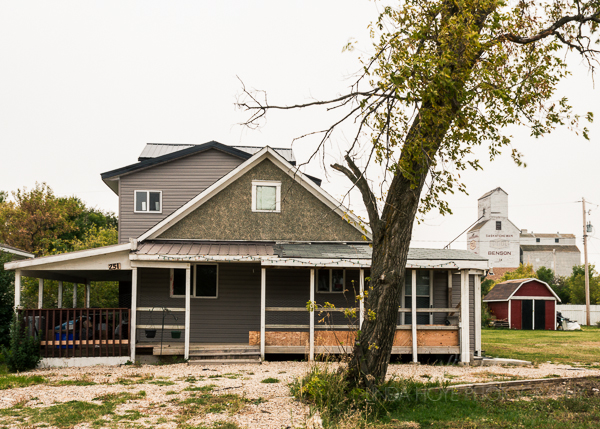 I didn’t think anyone was around, it would have taken only a moment to walk forward and get a better look but I had little curiosity about the bunkhouse-like structure tacked on to the back of my grandma’s house. We snapped a few photos and drove away.

Maybe it’s not done yet, I tried to rationalize. It has, after all, been a work in progress for over six years. Maybe, in time, the piece that was Grandma’s house will be fixed up and made to look like it belongs to the bunkhouse. Or, maybe this is as far as it will go and, as the oil boom begins to wind down, the structure that is there now will be abandoned and left to decay. I fear the latter is most likely to be the case.

We drove to the end of the street and turned right on King Street and headed toward First Avenue. There were other new homes, nice homes, cared for homes, along the way. First Avenue, the street I remembered from childhood with wooden sidewalks and old boarded-up shops, looked completely different with newer looking residences. It looked nice, kept up, cared for.

We drove to the R.M. building and got out of the car to look at a memorial plaque that had been placed commemorating the history of the hamlet. 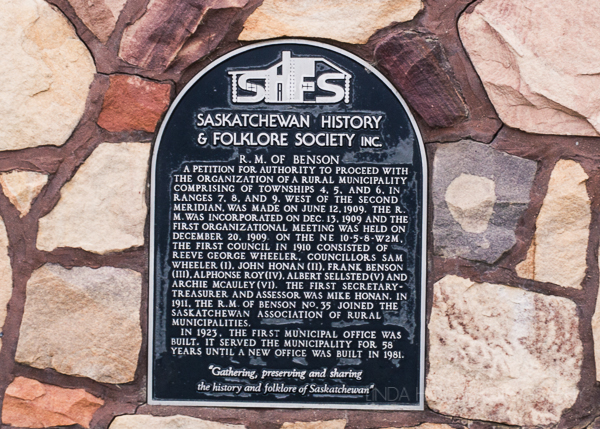 A petition for authority to proceed with the organization of a rural municipality comprising of townships 4, 5, and 6 in ranges 7, 8, and 9, west of the second meridian, was made on June 12, 1909. The R.M. was incorporated on Dec. 13, 1909 and the first organizational meeting was held on December 20, 1909 on the NE 10-5-8-W2M. The first council in 1910 consisted of Reeve George Wheeler, Councillors Sam Wheeler (I), John Honan (II), Frank Benson (III), Alphonse Roy (IV), Albert Sellsted (V), and Archie McAuley (VII). The first secretary-treasurer and assessor was Mike Honan in 1911. The R.M. of Benson  No. 35 joined the Saskatchewan association of Rural Municipalities.

Councillor Albert Sellsted was my great-grandfather. His son, Tenor, married Isabelle and died at age 35 leaving Isabelle with three young children. Albert Sellsted built the tiny house for my Grandma and her children and she lived there for the rest of her life.

My grandmother was a single mother during some of the harshest years this country has ever endured. She raised three children–Albert, Laura, and Edith–in a house not much larger than my living room. They were financially poor but when they told stories about those early years you would never know it. They rarely had enough, but what they had became enough, and for that they were thankful. Of the three, only my mom had children of her own: two adopted daughters who brought the sound of children’s laughter into the tiny house again–and the sound of mother’s scolding when they became too rambunctious in a space that was so small.

As we drove away from Benson I felt angry at the many oil wells dotting the prairie fields and our human tendency to go after prosperity and profit (in this case oil) at the expense of ignoring and forgetting the past. I mentally kicked myself for not holding on to that tiny house when I had the opportunity to.

Some sources say that the Bakken boom in North Dakota, Montana, Manitoba, and Saskatchewan is beginning to wind down. Others cite environmental damage resulting from fracking, oil spills, and even explosions. Let’s not forget about the social cost as a result of a changing demographic caused by the boom too. We, as a society, can too easily lose sight of that what matters when we put too much stock in profit at all cost.

There is much we can learn if we don’t ignore the lessons that history, and a tiny house, can teach us. 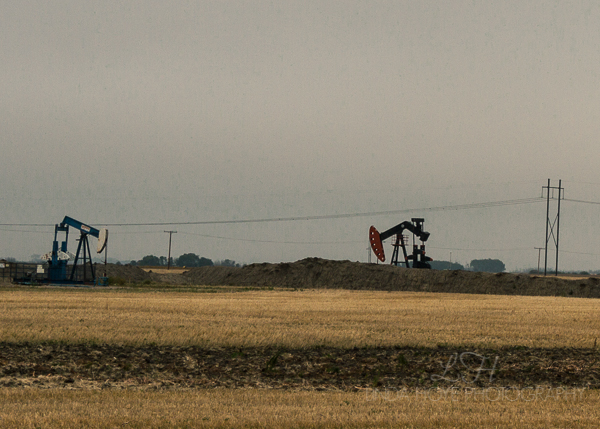