We’re taking the pups outside to the ash-covered backyard. Maya and Murphy race past me and, thinking Gerry’s right behind me, I leave the door open. We can’t leave the door open for long or smoke creeps in, so I quickly look behind me and see he’s not there.

”I thought you were right behind me,” I call as I pull the sliding door closed.

A few minutes later, while I’m watching the dogs take care of business, he comes out.

”I heard you say something, but I couldn’t make it out. It sounded like you said there’s a tiger in the backyard.”

i laugh, because by now, it wouldn’t surprise me. A tiger? Sure. Why not. Because a pandemic and a heat dome and drought and a province on fire and grasshoppers and apocalyptic skies and endless ash and charred pine needles falling isn’t enough. Let’s add a tiger to the mix.

We watch the dogs and I lean into his arms, weary, so weary of it all.

It does. And it doesn’t. Until it does again. And I know, faith, but I trust you’ll forgive me a moment (or more) of despair, because it’s all getting a bit heavy right now.

Later, Gerry uses the power washer to wash the ash from the front sidewalk and the leaf blower to move ash from the lower patio, and when he comes in we’re startled by thunder. And lightening. No one wants to see lightening around here right now. More thunder, more lightening, and—hallelujah!—a few drops of rain!

I’m canning salmon (I forgot to mention that he just returned from the sea with a beautiful, abundant haul of salmon and halibut), and when there’s just fifteen minutes left on the last small batch processing in the canner, we lose power. 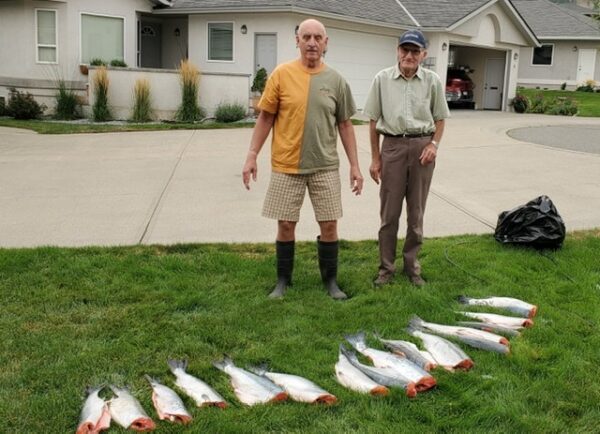 A check on the neighbourhood social media page reveals that a hydro box is on fire. BC Hydro and Kamloops firefighters are on site and estimate that power won’t be restored until after midnight. Well, that’s not the worst thing in the world. I’ll have to reprocess the last batch of salmon in the morning. We’ve got books, and we’re re tired, so we snack on cheese and crackers and frozen yogurt and head to bed.

This morning, it’s raining. It’s still dark as I write this, but I can hear it in the downspout. It’s a sweet, sweet sound. There are reports of mudslides, and I’m wary of what the day’s news will bring. For now, I’m just rejoicing in the rain and praying for much more.