Today I’m delighted to introduce you to Barbara Techel. Barbara’s recently released book, Through Frankie’s Eyes, is the touching story of how a sweet little dachshund named Frankie, helped her find a sense of purpose and significance. I had the honor of reading this tender story a few weeks ago and I highly recommend it. Please join me in welcoming Barbara!

I can’t tell you how often I’ve sat staring at the cursor on my computer. Blink. Blink. Blink. The words, “just write something” or “just start” bounce around in my brain.  I’m a writer. Why does the process seem so hard at times, I wonder?

The days I find it hard to find the words to begin a story, a blog post, or a chapter can feel daunting and make me question if I am truly a writer. As frustrated as I can get about this, there is one thing I do know. This is part of the process. This is normal.

Just like anything in life we must take a first step. We must begin. And so it was with my latest book, Through Frankie’s Eyes: One woman’s journey to her authentic self and the dog on wheels who led the way.

I began the process of formulating the idea for this book in 2005. I wanted to write about the human-animal bond connection.  I was learning some amazing life lessons from my chocolate Lab, Cassie and my miniature Dachshund, Frankie. The lessons I was especially learning from Cassie had stopped me in my tracks, and I was searching to do something more meaningful with my life.

This led me to becoming a writer at the age of 41 and writing a monthly column for our local paper. My column was called “For the Love of Animals.” Little did I know then, but this was the beginning of my process in working up to where I am today as a writer.

The idea for my book about the bond between me and my dogs was still fermenting in my mind as I practiced writing articles for the paper.  I had to build up the courage and confidence in myself as a writer. I kept the ideas swirling in my mind about writing my book someday. 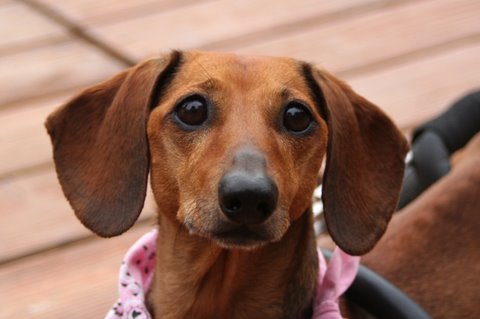 Nine months after I began writing for the paper my life took a sharp left on the path I had laid out for myself. My Dachshund Frankie became paralyzed and was diagnosed with Intervertebral Disc Disease (IVDD). I continued writing my stories for the paper as Frankie healed from her surgery.  But my hopes were dashed thinking I’d never write the book I wanted to write.

The idea of writing a children’s book had been presented to me during a session I had taken with a life coach a year before this. It didn’t really appeal to me at the time. Besides I didn’t feel “qualified” as I didn’t have children of my own. I also felt out of my league having never written a children’s book before, so I dismissed the idea quickly.

But I kept writing and sharing my love of animals with my small town audience. I had some adoring fans who loved my stories. This encouraged me during the times I sat staring at my computer wondering what to write for the next column.

My process was to just keep at it. Keep going. My passion for animals is deep, so once I had an idea, I could run with it, and then the process was so enjoyable.

Eleven months after Frankie’s diagnoses of IVDD and ultimately being custom-fitted for a dog wheelchair, I attended a weekend writing retreat an hour from my hometown. I went with the intent to pursue writing the book that had been in my mind for two years now.

I left the retreat Sunday afternoon truly excited to begin the process of starting this book that had been in my head for all this time. The following morning I awoke and out of the blue I said “I’m going to write a children’s book and it’s going to be about Frankie.” I was stunned and couldn’t believe I said that. I didn’t know where it came from.

I was nervous about writing a children’s book and hadn’t a clue where to begin. But that is exactly what I did. I just began. I followed my heart and let it lead me to the page to share the words I hoped would encourage children to be positive in the face of their own challenges.

This then led me to writing yet another children’s book in the Frankie the Walk ‘N Roll Dog series a year later. When I wrote these books I set aside time each week that was strictly devoted to writing the story followed by the editing process. I didn’t let anything get in the way of those writing days. They were sacred to me. For me, it was my heart that kept leading the way on days I felt stuck. I began to understand that this was all part of my process.

Five years later after two children’s books written and over 400 appearances I did with Frankie sharing her story, the book I wanted to write in 2005 begin begging for my attention. It was time. The process needed to continue, but in a new way.

I realized as I began setting time aside to write Through Frankie’s Eyes which is part memoir and inspirational, that I was exactly in the right space and time for this book. It was not ready to be written before this. Divine timing and the process of all the stories, articles, and children’s books I had written prior to this, led me to the book I’ve now completed.

What I’ve learned along the way is to trust the process-to trust my process- to know that when a story is ready to be written, it will. But to come to the page often- to show up- to continue to practice- to continue to write. To begin with the first word each and every time I come to the page. To have complete faith and trust that the words will form the story- that the story will then make its way into the world at just the right time it was meant to be born.