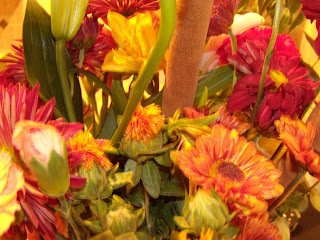 Today I celebrated twenty years with the company that I work for.  Twenty years!

In 1989 the record of the year was Don’t Worry, Be Happy by Bobby McFerrin, the cost of a US stamp was twenty-five cents, Lucille Ball died at age 87, and the Pulitzer Prize for fiction was awarded to Anne Tyler for Breathing Lessons.

I was a thirty-year old woman, my children were eleven and nine, and I was driven to move us forward into a life that, at that time, existed only in my mind.

I could never have fathomed the changes that would take place in the next twenty years.  I have changed careers, survived more than one company downsizing (Or rightsizing as they say now.  Yuck.), moved to Washington State, and watched the closure of the office in Canada where I first worked.

The celebration was bitter-sweet for me in some ways.  Of all the great people I worked with when I started with this company only a handful remain, and only one with whom I still work.  In twenty years, one would expect there to have been retirements, and departures due to attrition, but the significant loss of co-workers due to the change in the economy and the business climate is a heart-breaking thing to ponder.

Don’t get me wrong, I still work with a world-class group of individuals, but tonight my mind is on those I started out with twenty years ago in a tiny Business Systems department in Canada.

My manager, Bob – He was an English man of integrity and grace who always did the right thing for his employees. Forced to retire, perhaps before he was ready.

Ray – an English curmudgeon of a man who frustrated me to no end at times.  Retired many years ago when he reached that age.

Ed – a man with a sense of humor and tales to tell from his childhood that kept us entertained many an afternoon.  Retired when he was ready.

Wanda – She is still my very best friend. We shared the best of times, and the worst of times over the years.  Retired.

Dan – Retired.  He had a nickname for everyone he came into contact with.  I was known as Linda Lou.

Barb – A behind-the-scenes girl who had a great sense of humor.  Once, when I left my pencil in her office she sent me an email telling me that she was holding it hostage and if I didn’t do something-or-another she would take the lead out! Outsourced and then terminated due to changes in the company.

Norma – Retired, also perhaps before she was ready due to downsizing.  I bet she’s square dancing and having a grand time these days.

Pete – The last man standing, a man of integrity and someone I consider a friend.  He, alone remains.

So today, I raise a glass to toast these who have crossed my path.  Each one has left an impression, each one is remembered with a smile on my face.