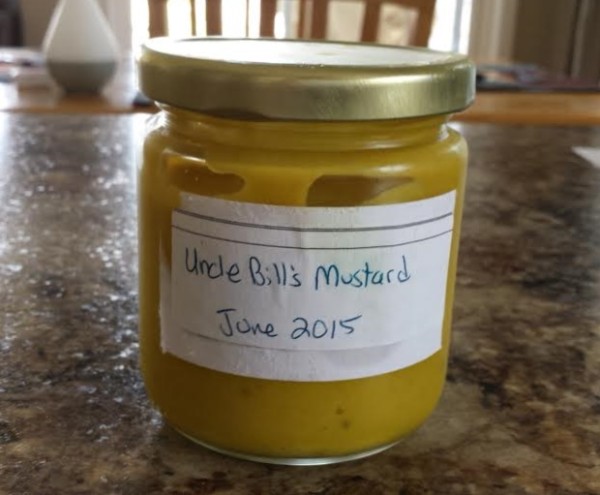 One of the flavours I remember best from childhood was the homemade mustard Uncle Bill made. Summertime meals were simple back then: a plate of cold cuts, white bread or homemade buns, assorted pickles, sliced tomatoes and cucumbers, butter, and a variety of condiments. I always reached for the little baby food jar filled with the Uncle Bill’s mustard and smeared a generous dollop on my bread and covered it with a slice of ham.

I used to beg Uncle Bill to give Mom the recipe for this special treat but he always declined and, instead, gifted us with a small jar to take home. A number of years ago when I was staying with Uncle Bill after my dear Aunt Edie died suddenly (You may recall that horrible day from my book, Two Hearts: An Adoptee’s Journey Through Grief to Gratitude.) he finally relented and allowed me write down his recipe as he mixed up a batch. Good thing, because by the time he passed away a number of years later I was persona non grata and the recipe would have been lost forever. (More about that heartbreak in my book too.)

Anyway, a few weeks ago I came across the recipe in my recipe box and decided to mix some up. It’s been many years since I made the mustard and I was disappointed at my first taste; it didn’t quite seem the same as what I remembered. I thought, perhaps, it needed to sit for a while so I tucked it away in the fridge. This afternoon I put some of the mustard on a hot dog and was delighted to find that it had transformed into the exact mustard I remember Uncle Bill making.

Mix together the flour, salt, pepper, and dry mustard.

In a separate bowl combine the vinegar and brown sugar.

Add the vinegar/sugar mixture to the flour mixture.

Stir in the cream and mix well.

Add the turmeric if using it.

Put the mustard in small jars (As I mentioned, Uncle Bill used to use baby food jars. I used a couple of empty jam jars for this batch.) and store in the refrigerator for a couple of weeks to allow the flavours to blend together.

Unfortunately this isn’t a recipe that can be processed in a canner to make it shelf-stable. Store it in the refrigerator and use your own judgement as to how long to keep it. Mine won’t last long enough to worry about it.