A number of weeks ago something occurred that caused me deep distress and I began to worry and fret over how it all might turn out in the end. In some ways I was on the sideline of this situation but the fact is, what affects people you love affects you as well, and the outcome of what might happen had the potential to touch some deeply personal areas of my heart.

I became obsessed with the worst case scenario and what it would mean if it came to pass. I spent too many sleepless nights praying, silently weeping, or just laying awake thinking about what if.  I walked through my days on auto pilot, thankful for the busyness at work that served as an escape for a few hours every day.

Weekends have been harder as I had time to think, project outcomes in my mind, and speculate on motives, worry about people I love. As I tended my garden, an activity that usually calms and soothes me, I’ve found myself brushing away tears that fell unnoticed, unbidden, unwanted.

Even as I counseled another person to practice self-care during this time  of turmoil and uncertainty, I haven’t heeded my own advice as I sought relief for the pain I’ve been feeling inside. I been barely able to tolerate the pain and fear that has shrouded me. I told myself to stop obsessing; again and again I released the situation to God and tried to let go of it. I had a measure of success but every day it has been an act of will to hold on and not allow myself to fall apart.

I have been unable to talk about the situation without weeping so I haven’t talked about. I’ve held balled and soggy tissue in my hand as I’ve written about it.  I tried to hold my emotions in; I haven’t wanted to feel the anguish that has felt like it has the power to overwhelm me. I’ve retreated inside, where that old baggage from my past tells me is the only safe place.

Here’s the thing, though: the worst case scenario came true but, like it has for every day of my fifty four years, the sun has still risen. What I feared might overtake me hasn’t. God is still in control and has a plan for my life and the lives of everyone involved in this situation. 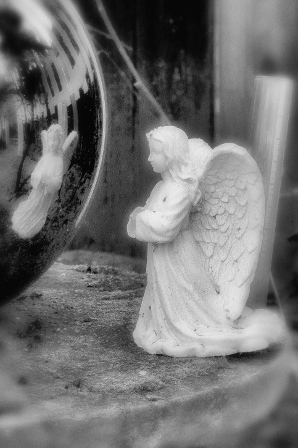 This morning as I surfaced from the comfort of slumber I sensed a whispered voice telling me to “look for the magic today”.

Somewhere, closer than I realize, there is still magic for those affected by this circumstance, for me, and for you. I have to believe that–I do believe that–and today I am going to consciously and deliberately keep my eyes open to find it.